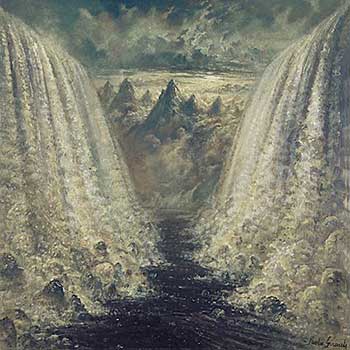 BLACK/DOOM/DEATH: There’s something to be said for never ruling a band out. For instance, I’ve heard the name Forgotten Tomb kicked around variously since the early aughts. For whatever reason, however, the Italian entity never made it past the outer rings my radar and, presumably, there has never been enough compelling hype that’s driven me to take a leap of faith and check them out. It’s only been now—10 albums in—that their din has actually invaded my ear space. And as my crotchety former journalism professors have internal conniption fits about me ignoring their cardinal rule about first person references and directly inserting oneself into the thrust of a written piece, there’s no denying that having no previous exposure to these veterans from Piacenza has contributed to the revelatory experience delivered by Nihilistic Estrangement. There are no comparisons to be made, no precedents set, no expectations to live up to, no preconceived notions. My determination is as pure as overnight snowfall and simply about whether this new album is sweepingly good, agonizingly bad, or a manifestation of shoulder shrugging indifference.

But nothing exists in a bubble. It is my understanding that Forgotten Tomb has precedently assumed various guises over the years—depressive bedroom black metal, dark death rock, bluesy Danzig-ology, one-man project, full-on power trio, etc. As such, the permutation that has so enamored your humble reporter with this latest album hasn’t always been the modus operandi. Presently, it would appear that many, if not the entirety, of Forgotten Tomb’s past lives have been stirred into the new record’s pot. Album opener “Active Shooter” slinks in with a swampy mid paced swagger and minor-key overcast elevated by always entertaining artificial harmonics and a virtually sing-along chorus that overall uncannily recalls Glorior Belli. “Iris’ House Pt. I” adds vocal croaking, sleazy slide, and weeping guitar bends to a massive doom speckled and black metal—and Black Album, for that matter—chorus, whereas its counterpart, “Iris’ House Pt. II” oozes like Paradise Lost and Bethlehem engaged in trench warfare. Album closer “RBMK” hearkens back to the scathing and blasting of early second wave black metal while a wispy layer of echo-y shoegazing guitars and alt-rock bass walking punctuate the title track’s melodic slo-mo dread.

Where Nihilisitc Estrangement triumphs is in guitarist/vocalist Ferdinando “Herr Morbid” Marchisio, bassist Alessandro “Algol” Comerio, and drummer Gianmarco “Asher” Rossi’s ability to lasso their historic past and present interests into discernible songs that cut through the clutter. Variety underpins each of the six tracks here, but so does attention paid to the synthesis of that variety. They utilize judicious amounts of tunnel vision in staying true to the elegiac, tri-tonic, and sinister, but also heave against restriction via nontraditional sounds, unorthodox moves, and a warm embrace provided by vintage recording equipment and techniques. While results may rage about which album reigns over which amongst those with longer bouts of experience with the Forgotten Tomb canon, I’m happy to have had my cherry popped by this new record’s undeniably airtight compositions, soulful delivery, and devastating impact. ~ Kevin Stewart-Panko

PVRIS: All We Know of Heaven, All We Need of Hell