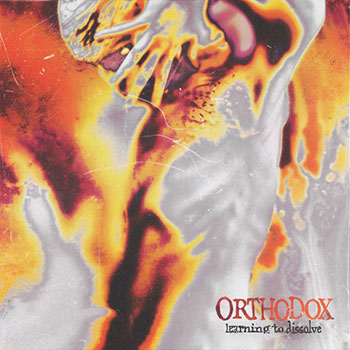 MODERN HARDCORE MEETS METALCORE: Nashville, TN metallic hardcore act Orthodox is back with their third full-length and Century Media Records debut, Learning to Dissolve. Much like their previous releases, their latest features a fusion of modern hardcore with early 2000s metalcore and Slipknot-esque, late 90s nu metal guitar riffs. There are a lot of bands trying to do this right now, but few who do it well. Luckily, Orthodox is one of those few that have been able to pull from the nu metal and old school metalcore greats while putting their own spin and flavor on it.

Right away the listener is thrown into the circle pit on “Feel It Linger,” as buzzsaw guitar riffs ring out and fast double bass ensues over frontman Adam Easterling’s growls. The intensity continues with “Head on a Spike,” before the first of a few standout tracks. “Cave In” begins with a sick pinch harmonic guitar part that soon is joined by some chunky guitar riffs before picking up speed and has a tempo that makes you want to headbang along and mosh violently. Other highlights on the record include crowd kill ready track, “Nothing to See,” and absolute ass beater “Dissolve,” the latter of which might be the best song on the entire record, featuring some of the band’s best guitar work and letting Easterling’s raw vocals really shine.

If there is any criticism to be made about this record, it is that his style of spoken word into screaming feels over-utilized to the point of sounding cheesy at times and overly monotone at other times. “Voice in the Choir” clearly displays that Easterling is quite capable of making a greater range of guttural tones and timbres. It might’ve been more interesting to hear this range on earlier tracks in the record, but as a whole, Learning to Dissolve is a solid effort for this time in the band’s career and a clear statement that Orthodox is here to stay. If you’re a fan of Knocked Loose, Boundaries, Dying Wish, or Varials, you will dig this record. ~ Nathan Katsiaficas