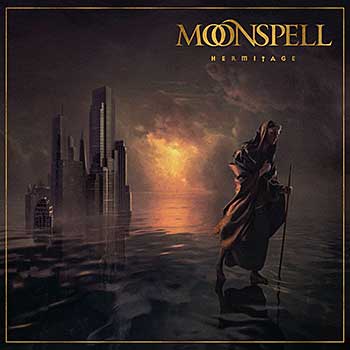 TENURED GOTHIC METAL: With 13 studio albums and nearly three decades of destruction now under their belts, goth metal pioneers Moonspell are showing no signs of slowing down. Hell, they seem to barely be showing any wear on their tires. Epic is certainly one word you can use to describe Moonspell’s Hermitage. Grandiose is another, simply put. Case in point—this is a band with a lot left in the tank, and one that isn’t going anywhere anytime soon.

“The Greater Good” is a glimpse into Moonspell’s unique skill set, a beautifully woven tapestry of melodic goth metal that descends into heavy darkness. “Common Prayers” is a suitable follow-up to such a strong opening track, again combining forces of light and dark gothic metal to create a memorable song. “All or Nothing” is ethereal and ambient, an emotional slog of track that lingers on the brain long after it concludes. Moonspell leans more into the metal than the goth on the title track, upping the amplitude with crushing vocals and heavy riffs. On the flip side of Hermitage, “Entitlement” is as expansive and grand as the album gets, thanks to soaring guitars and crisp percussion—this is the best Hugo Ribeiro’s cymbals sound on the record, his crashes lush and vibrant while the china work is as trashy as ever. “The Hermit Saints” exemplifies all things epic, a true metal anthem in every sense, “Apoptheghmata” is strikingly atmospheric, a track that again shines the spotlight on each member of the band in their own right, and “Without Rule” continues the trend of complex, destructive goth metal, a track that serves as the emphatic exclamation point on Hermitage.

“Hermitage is a revolutionary, wonderfully intuitive, and epic journey,” the one-sheet accompanying the album reads, which is a pitch-perfect summation. Hermitage is salient and intricate, yet emotional and devastating. This album is exhaustive, which is surely how you feel once this journey concludes. ~ Brian Campbell