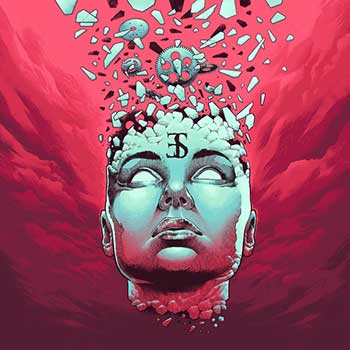 BRITISH METALLIC HARDCORE: Employed to Serve is one of several heavy acts that has broken out from the UK’s heavy music scene and garnered international interest and acclaim in recent years. Now riding a wave of enthusiasm on their home turf, the band is throwing down the gauntlet with their fourth full-length, Conquering.

Previously, Employed to Serve’s sound had been more hardcore based, as on their last release, Eternal Forward Motion. However, with Conquering, the band continues to push in a metal influenced direction, incorporating more blistering guitar solos, clean vocals, and even a few epic orchestral samples. It’s still chock full of hardcore riffs and beats that will make you want to hate mosh your way around the living room, but the band avoids feeling stale by pulling from influential bands, like Slipknot, Gojira, and Machine Head, and putting their own spin on it as they deftly weave these elements from a variety of metal subgenres with hardcore to take listeners on a heavy, unpredictable ride.

The main riff for “World Ender,” sounds like something you might hear in a Gojira song, but it’s slowed down and has more of a crunch to it. The dissonant guitar solo over the riff melds perfectly into this wall of sound, with vocalist Justine Jones shrieking and roaring above it. The chorus feels more nu metal with guitarist and backing vocalist Sammy Urwin’s low, dark sounding clean vocals floating just above the fray. All of this combines to create a unique sound that stands apart from the scores of other hardcore bands out there.

Meanwhile, “We Don’t Need You,” with its groove oriented riffs and defiant call and response gang vocals, feels inspired by a mixture of Hatebreed and Lamb of God. Other noteworthy tracks, aside from the singles “Exist” and “Mark of the Grave,” include the thrashy, circle pit ready song “The Conquering” and nu metal infused “Twist the Blade,” both of which are sure to cause absolute mayhem live.

Jones isn’t afraid to delve into topics like mental health and addiction in her lyrics, as she does on “The Mistake” and the crushing track “Sun Up to Sun Down.” It’s hard to find a weak track on the album, which is relentless in its brutality but constantly shifting in intensity as the band experiments with different sounds.

The record closes with what might be their best and most dynamic song on the release, “Stand Alone.” The track starts with Urwin’s crooning over reverberating guitars, swelling into a dark groove before Jones really lets loose. Slick hardcore riffs and blast beats ensue, all of this is building to a massively heavy breakdown at the three and a half minute mark as she screams out, “I let you take from me!” Employed to Serve may not be a household name yet, but once this latest effort hits, they’ll be conquering venues here as well. ~ Nathan Katsiaficas