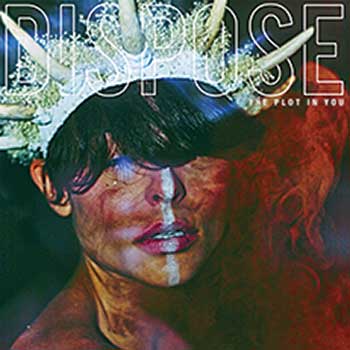 THE PLOT IN YOU
Dispose

THEMATIC METALCORE: The Plot in You has continued to evolve its aggressively brutal formula into something deeper, atmospheric, and darkly emotional. For its Fearless debut and fourth full-length, the band has taken that growth even further, placing an intensified focus on the impact each song leaves upon the listener. In its early years, The Plot in You fueled pure, pissed-off emotion, but with Dispose, there’s a maturation behind that lighting fluid, one that delves into a profound sadness and longing in life. This isn’t a record of breakdowns or screams, like those of the past when the band was at its most popular. Now that some time has passed, The Plot in You is returning to the spotlight thanks to Fearless. In a sense, it’s a rebirth, and the music here certainly reflects that. “One Last Time,” “Feel Nothing,” and “The One You Loved” have the most powerfully loud and encompassing moments, while “Rigged,” “I Always Wanted to Leave,” and “The Sound” strike at the heart of the listener with ease and a strong grip. Though the album isn’t without its flaws—at times, it becomes a little too steady and safe—Dispose marks a great comeback for a band that has undergone some radical changes since they were last large within the scene, and this release proves The Plot in You still has plenty of prowess and skill. ~ Nathaniel Lay

ENTER SHIKARI: Nothing Is True & Everything Is Possible