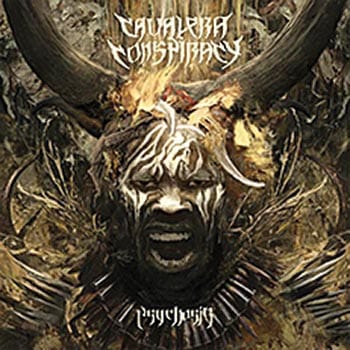 CHUNKY VIOLENCE: Having changed things up a little with 2014’s Pandemonium, which featured a more raw sound and followed some unexpected tangents, Cavalera Conspiracy returns with a potent desire to split skulls and start fights, and they’ve provided a hell of a soundtrack against which to do such things. You know you’re in good hands after the first few seconds of “Insanity” are unleashed, which deservedly drew favorable comparisons to Arise era Sepultura when dropped ahead of the album release. Over what follows, the energy never lets up, making this easily the best collaborative effort between brothers Max and Igor Cavalera since 1996’s Roots. Music really doesn’t get much meaner than “Impalement Execution” and “Terror Tactics,” the stomping grooves and sneering vitriol of the former tough enough to crack concrete, while the latter is pure thrash delirium. With “Hellfire,” they go down a more industrial route, recruiting Godflesh/Jesu main man Justin Broadrick to collaborate, and while on the surface it may not seem as violent as the other tracks contained here, its warped, throbbing passages are not exactly friendly. Closer “Excruciating” is suitably brutal before giving way to a trippy, extended outro featuring a knowing spoken word piece that makes for a satisfactory end to a solid collection. ~ Dan Slessor