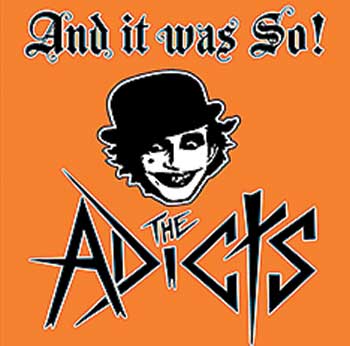 THE ADICTS
And It Was So!

BRITISH PUNK: American punks got to hear UK band The Adicts pretty early on, as they had formed in late 1977 (after their previous incarnation as Afterbirth & the Pinz) and ended up on Posh Boy’s early across the Atlantic DIY compilation Punk and Disorderly Vol. 1 (1982). The band distinguished itself both by making a direct visual reference to the droogs of Stanley Kubrick’s A Clockwork Orange and also being a lot more fun than contemporaneous Oi! rabble. For those that felt the scene lost the garage influence of The Vibrators a bit too early to the wrecked likes of certain crust overachievers, The Adicts kept the basslines bouncy, the melodies juicy, and the threats more punching up positive. The Adicts remains very busy even today, playing all over the world more than 50 dates a year, always connecting with fellow fans trying to keep punk lively. They capture their live palette on And It Was So!, featuring anthems from the cheery character defining title track to the ode of Surrealists “Picture the Scene,” reflecting both their giddy stoicism and revealing deeper artistic inspiration. Good for Nuclear Blast for bringing The Adicts onboard, knowing that the saltiness of a Suffolk upbringing is a proper investment to rally the troops. Feels like family—keeping it raw and familiar in all the best ways. ~ Lou Flesh