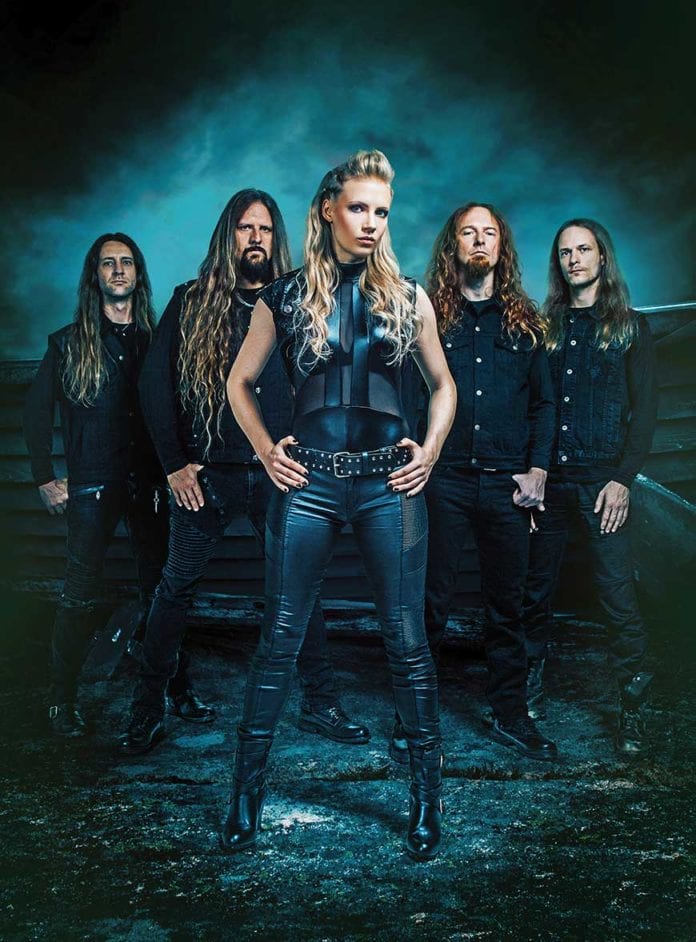 Norwegian/German folk metal band Leaves’ Eyes has overcome several obstacles in the past year and a half. From the divorce of husband/wife bandmates Liv Kristine and Alex Krull (keyboards) to new powerhouse singer Elina Siirala and the band’s latest release, Sign of the Dragonhead, Leaves’ Eyes has been rejuvenated. On Sign of the Dragonhead, the band’s classic, Viking themed folk metal style remains intact. However, with Siirala’s broader vocal range, the album has more theatrical dynamics than ever before, and the band has really stepped up its game. Brilliantly written and composed by Krull and longtime guitarist Thorsten “Tosso” Bauer, Sign of the Dragonhead contains everything you’d expect from the band. With the immediate success of the shows with Siirala—most notably her first in Indonesia in front of 20,000 fans—the band took that live energy and injected it into the writing and recording of Sign of the Dragonhead. Alex Krull and Thorsten “Tosso” Bauer talk about their new singer, new album, and more.

Alex, you went through a bit of a messy period in your personal life, which affected the band. With trying to find a new lead singer, did you ever consider changing the band name and starting fresh, or focusing more on your other band Atrocity?
Krull: Leaves’ Eyes was always a band from the start. Although we’ve had other members change through the years, there was never any thought of changing the name. Why would we? Or why should we focus on Atrocity and treat Leaves’ Eyes as a side-project. We’re a real band, and, of course, we continued. We found Elina to be a perfect match for the band’s sound. So, everything is fine at the moment.
Bauer: When Liv left in 2016, it was a musical roller coaster because Alex and I do it all by ourselves. We have an internal competition. All the classic melodies that you hear are composed by me and Alex, which were already on King of Kings [2015] and had a similar key with the orchestra and instruments. So, for us, it’s not much of a change because King of Kings and Sign of the Dragonhead have the same working structure that we had generally. Of course, there’s a difference now with a different singer. Liv chose to leave. She said she wanted to leave the band and couldn’t go on touring or there would be a breakdown for her. So, we had to make a decision. We also got lucky because we only invited one person, which was Elina. She was brave and crazy enough to do this. We had shows lined up in Asia and Indonesia. We either stop the band or we go on, and we thought, “Why should we stop?”

What was the writing process like for Sign of the Dragonhead? How did you approach the material?
Bauer: It’s really amazing on this album. The last album King of Kings, the star of the album was the concept and the production. Of course, it was the first time we worked with the amazing London Voices. They have worked with bands like Queen, Pink Floyd, and Paul McCartney. Mostly, they do soundtracks. This time I think they’re the star of the album. Because this album, we were more able to know exactly how and where we wanted which sounds to happen. These new songs work in this massive production, and they work as melodious rock songs. They also work just as single versions. I think the star of the album is the songs. There are seven or eight songs that could be used as the single.
Krull: Also, we took a lot of the energy of the live shows. If you play some songs live, we had this feeling that it was really great and said, “Let’s go to the studio and continue this.” It’s like cooking a very good meal, and then you’re like, “Alright, next time I’ll know even better.” In almost two years, we’ve done so many shows and we’ve toured all around the globe. We were headlining festivals in Europe. We put it all on stage. We had two US tours, and the fans have been great everywhere we played. Everything worked perfectly. So, we are much more forward at the moment.

“WE GO IN WITH THE BAND TO NEW HORIZONS, AND WE ARE STRONGER THAN EVER”

What does the title Sign of the Dragonhead signify? Although it’s not a true concept album like King of Kings, is there a running theme throughout it?
Krull: It was very clear to continue with the concept. The ship of dragonhead—the Viking long ship—that was in my head. There was a picture that he’d go on the ship going through the waves in a thunderstorm was a symbol of the times the character was going through. It’s a strong symbol for the band itself. We go in with the band to new horizons, and we are stronger than ever, having the best album we’ve ever wrote. That is very valid to the lyrical concept and the reality of the band.

The Nordic history and Viking theme is still an important element to Leaves’ Eyes image and lyrics.
Krull: For the lyrical side of the new album, it was very important for us to keep the way we were doing it in the past. Also, I was involved in the concept, as every Leaves’ Eyes record. Especially with the art, it was very clear to go hand in hand with how we were with the band and the direction in the Leaves’ Eyes lyrical concept. This time it wasn’t just one song we were writing for the album but several. Three great sagas that are connected to Norse mythology. But the concept of the album is actually starting from where the last album was ending. There are lots of stuff that are connected to the personal core and very important for all of us. And there are some really great topics to write about. It was very cool to have other topics on this album this time.

With the Fires in the North EP [2016], was that to introduce singer Elina Siirala and a new direction for Leaves’ Eyes?
Bauer: The title track, “Fires in the North,” was also combined with some songs from King of Kings. Because fans were asking for us to do some songs from King of Kings. That was the idea—to do one brand new song that was fresh and combine it with older material.

“Jomsborg” is about the legendary fortress and its Baltic Viking army. Alex, is that the area where your ancestors hail from?
Krull: It’s great that you asked that because it’s really true. It’s a great legend, and the story is connected to that as well. The legend comes from the area where my father comes from. It’s my homage, a tribute to the legend itself, the saga, but also to the modern Viking. It’s really meaningful to me when we’re playing the song and when we recorded it. There was too much personality in there.

“Waves of Euphoria” is the most diverse and epic track on Sign of the Dragonhead. What were you going for on this song?
Bauer: It was a tribute to the Njord [2009] album, because on the first two albums we had a lot of songs that followed four or five minutes, so I said, “Why don’t we do an epic track?” It’s nice to come up with a different mood and an opportunity to add more atmosphere and dynamics. It’s a long song, and there’s so much involved you can usually get lost. But in the moment when I tend to get lost somewhere, Alex manages to bring it back to a point with good structures. We’re very happy to have all these dynamics, and the instruments and the choir at the end. It’s like from a movie, and it grabs you by the neck.

Alex, as the producer of Sign of the Dragonhead, what were you going for sound-wise, and what do you like about producing your own albums?
Krull: That’s always the option with Leaves’ Eyes. This way, you can really care for the music yourself. You have it all under control. It’s always a message of hard work when you come to the end of an album’s production because it’s quite demanding and time consuming. As the work of the material of Leaves’ Eyes, there’s so many tracks inside, and you want to keep that going as a powerful metal band. It’s a matter of taste, but it’s very hard to get it all together. The good part here is, we have been doing this on every record, while other bands maybe just experiment and do it once. The more you do this stuff as a producer—and I also have worked with other bands for decades now—it helps a lot when you work on a record like this.

Speaking of other bands, what is the plan for Atrocity?
Krull: That’s very good that you asked. Masters of Darkness EP is out, which precedes the full-length album that will be released in 2018. We’re very excited about it, of course. We were on tour, we played like 50 countries and five continents with Atrocity, and everybody wants us to come back. We were writing for a long time with the new Atrocity material, and we were perfectionists—we wanted the best. The tracks on Masters of Darkness sound amazing. People love it. It’s a brutal mix of death metal. If you liked previous records by Atrocity, then you will love Masters of Darkness and the new Okkult II album. I’m pretty sure about that.