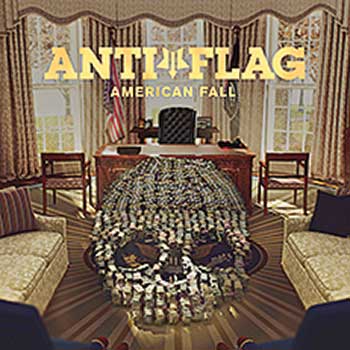 TIMELESS INFLUENTIAL PUNK: Over 20 years into its career, Anti-Flag has returned as strong as ever with the band’s 10th outing, American Fall, focusing on the 2016 election and the frequent controversy that has followed. Falling somewhere between For Blood and Empire (2006) and The Bright Lights of America (2008), this collection remains tight and impacting, but wonderfully melodic. The group vocals are the strongest from the band in years, leaving songs like “American Attraction” and “Finish What We Started” blasting on repeat with their big hooks and catchy lines (partly due to the influence of co-producer Benji Madden, who understood the band was going for something sonically catchy). Ever political, but explosively fun in its message, Ant-Flag has created another surefire hit with American Fall. It may not be their most definitive or unique experience—like 2015’s American Spring—but it certainly borders on nostalgic and fresh for the band, taking from the familiar while also expanding into adolescent punk rock territory. “When the Wall Falls,” “I Came. I Saw. I Believed,” and “Racists” all add to the catalog of powerful Anti-Flag songs begging to be played again and again. Even 20 years later, the band is still fighting for change through the use of undeniably memorable music. ~ Nathaniel Lay

JOHANSSON & SPECKMANN: The Germs of Circumstance