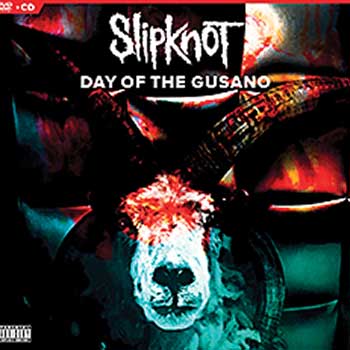 SLIPKNOT
Day of the Gusano

FRENETIC METAL CIRCUS: Anyone who has had the pleasure to take in a Slipknot concert can attest to the sheer madness at hand when the demented circus of sound kicks into full gear. The nu metal pioneers bring every ounce of blood, sweat, and energy to the stage with every performance, and enough pyro and mind-bending theatrics to fuel a year of Cirque du Soleil. Any performance by the nine piece ensemble is truly worthy of documentation, so it is little wonder that Slipknot’s debut in Mexico City was worthy of special recognition. Day of the Gusano is the manic child of that unholy event, and the band brought forth a set list deserving of enshrinement. Frontman Corey Taylor holds the crowd in the palm of his hand, the audience hangs on his every word, and his enthusiasm for the historic show is palpable. Part greatest hits (“Psychosocial,” “People = Shit,” “Surfacing,” “Duality,” and “(Sic)”), with some lesser played rarities thrown in for good measure (“Prosthetics,” “Me Inside,” “Eeyore”), Day of the Gusano is a must own for any Slipknot fan and a perfect introduction to one of the craziest live bands in all of heavy metal for the uninitiated. For those fortunate enough to catch the DVD performance, expect an assault on the senses—auditory and visually. Slipknot brings it, so consider yourself warned. ~ Dillon Collins