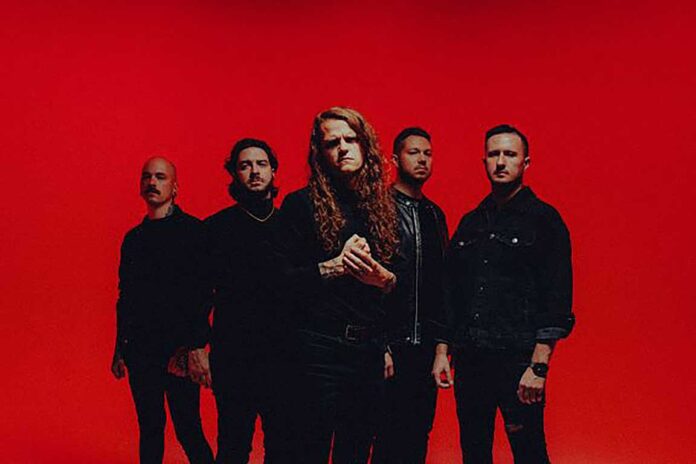 Miss May I quickly rose through the ranks, blowing away fans for over a decade with their fast, aggressive, thrashy metalcore mixed with powerful lyrics. Levi Benton discusses the band’s new album, Curse of Existence, the recording process, as well as being a new dad and how it has impacted his life.

How was the recording process during the pandemic?
This was definitely the hardest album that we’ve done because of that. Not only us getting into a room but studio requirements, and it going one way and revert, going another way and revert. The hardest part was—this has been our careers for 15 years— when the world stopped we had to get gigs while we were home. We all had at least one full-time job and some of us had up to four jobs, and then we had to go do the album. So, we would be in the studio and tracking vocals, and I would get a work call and there’s an emergency. I’m, “Guys I need to take this.” It added a whole new layer to the album, the process, and stress, but the cool part of that is the experience. We’ll never forget this album because we did it during the hardest time for all of us, and two of us became dad’s during the pandemic, so it was crazy.

What’s it like being a new parent?
It’s crazy. I don’t know anyone that’s a parent, so to me, it looked like I wasn’t going to be in the band again and tour, but I brought her out on tour and the guys loved it. The other bands loved it, so okay, kids can go on tour! I’m very thankful. We were out with All That Remains, and a few of those guys are dads. They have never brought their kids out, and they saw that we had a kid out and were, “Maybe we can change this up?” So, it was cool.

What was your lyric writing process on Curse of Existence?
It was hard to not write about COVID. I don’t have a notebook full of lyrics. I wait until the guys are done, so all of our albums are period pieces of where we were at that time in our lives. It was hard to not write about that since it consumed our lives, but my perspective completely changed. I’m excited for longtime fans to hear it because I’ve always written in another perspective. A lot of our lyrics are about how I was raised and parents, lack there of, and now the albums are about being a good parent. It’s like a follow-up to Shadows Inside [2017] with a different perspective. It organically happened like that. It was interesting because I looked at previous songs I’ve written, and I was, “Okay, now I want to look at it from this perspective,” so that was exciting.

How do you choose where to put clean vocals?
I feel like it’s changed. I feel like it was very structured at the beginning because we were trying to follow structures to get noticed. When we got more comfortable and could breathe a little bit and do our own thing, it came from melody and adding a layer of melody there that we needed to emphasize and also add a layer of emotion. I feel for a metalcore band, we’re very emotional, and that’s a whole other layer we can use. So, let’s bring Ryan [Neff, bass, clean vocals] in. This album we added a lot more screams like Swedish metal. We actually recorded the album twice. The album was very weird and abstract, and for the first time ever, the label sent it back. “Can you do a couple more albums before we get here?” We were so cooped up for so long that we started sounding like At the Gates and Darkest Hour, but with Ryan and I, we track vocals together.

What should fans expect from Curse of Existence?
Longtime fans can expect some OG Miss May I structure and riffs, which is really exciting, and that comes from being us and being comfortable. Fans can really see through us when we aren’t being ourselves. Newer listeners, there’s a lot of traditional metalcore and traditional metal that we spiced up with the Miss May I sound, which made the new Miss May I sound. We wanted to feel like kids again playing, and that’s what it felt like in the studio this time. It felt like I was 16, and it was awesome.

SYLVAINE: The Transience of Life