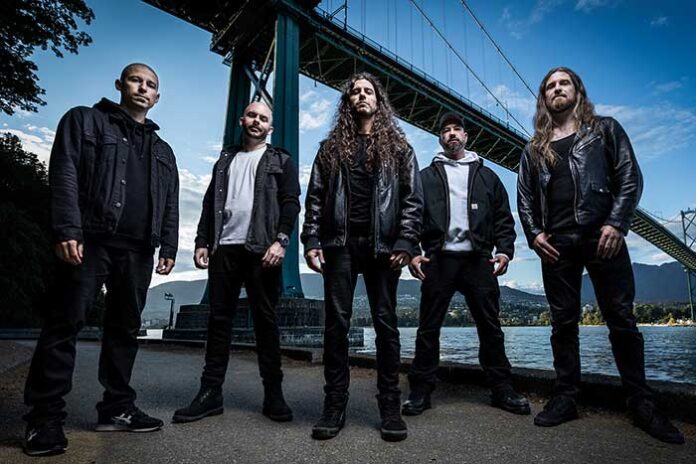 Since its inception in 2009, Vancouver’s Archspire has proudly flown the warp speed, technical death metal flag. The danger of unabashedly staying tech for 12 years and four albums is not only painting oneself into a corner, but risking tearing it all down by the simple act of doing something out of character. With their latest album, Bleed the Future, Archspire has carved out breathing room within tech death’s confines by upping the melody and infectiousness and allowing the listener to grab onto something beyond super human blast beats and rocket propelled sweep picking. We caught up with bassist Jared Smith and guitarist Dean Lamb to talk about musical catchiness, the relationship between cooking shows and tech death, and how Jason Momoa makes them nervous.

The question being asked of every band these days pertains to how albums have been impacted by COVID? So, how was Bleed the Future impacted by COVID?
Dean Lamb: We’d been writing since the beginning of 2018, and the way I think about it is like this: we had two tours booked—a Canadian run and a full Australian headliner—and both of those got canceled. So, it was, “Great, we have more time to write.” But there were local restrictions, so we couldn’t really get together. It kind of balanced itself out and didn’t really affect us too much in terms of writing. The Coronavirus came right at the end of our last album [Relentless Mutation] cycle. We had those tours, but we hadn’t really got into the swing of promoting them, tickets weren’t on sale, we hadn’t bought any merch. We just squeezed in under the wire.

Jared Smith: It was probably a good thing because we were in the rehearsal studio Monday to Friday writing and that was way too much. You’d hit a wall on Tuesday, you’d come back on Wednesday being, “Ah shit, what were we doing?” and it would affect your whole week. We weren’t allowed to rehearse and get together because of the restrictions, so we were writing at home and sending things back and forth, and that was a good little bit of space from each other.

Are you the type of band that normally road tests material, and how did not being able to do that change your creative approach?
Smith: We did it on Relentless where we did a couple new songs before we recorded them. I think we did “Remote Tumour Seeker” a few times…

Lamb: …and it changed quite a bit. I remember we played Seattle when we were prepping for Relentless and I was onstage thinking, “Oh, this part should change,” which was really good. We didn’t get to do that on this album, but we were way more comfortable with [producer] Dave Otero, so that meant that road testing got replaced by us giving him much more thought out and developed preproduction demos. If you compare the preproduction on this album to Relentless, there’s a very big difference.

What were you aiming to do differently on Bleed the Future?
Smith: The number one goal is to write a bunch of good songs. We’re all really proud with what we did with Relentless, so we were hoping to keep on that trend, to continue writing good songs or hopefully better songs, and make the songs faster with more extreme techniques, but with really good and catchier hooks.

“WHEN YOU’RE FOUR ALBUMS DEEP, YOU’RE COMPETING MORE WITH YOURSELF THAN ANYONE ELSE.”

Lamb: The secret weapon we have for catchy riffs on this album, more so than the others, is [guitarist] Tobi [Morelli]. He wrote some really simple, catchy, and singable riffs that I would have never written. I would have been, “Yeah, let’s do that, but twice as fast.” But the reason they’re good is because they’re slower and catchier, and we didn’t have a lot of that on the last album. There are straight-up sections on this album where it’s very melodic and recognizable. He came in with them and we were all like, “Fuck yeah!” That’s a big change because up until now we’d had some catchy stuff, but we’re lumped together with all the bands where it’s “tech death is a competition” and in a lot of ways it is. But when you’re four albums deep, you’re competing more with yourself than anyone else. You’ve probably found your sound and all you’re trying to do is not be derivative of the last album—you’re competing with the bar you previously set. For this one, we were, “Let’s make the crazy stuff crazier and make the catchy stuff catchier, more melodic, and singable,” and he had stuff at the ready, which meant I didn’t have to do anything and that was great (laughs).

Was that material catchy from the start, or did it become catchy via daily rehearsals and the repetition of playing?
Smith: The stuff he was doing was immediately catchy. There were really strong melodies, most of it was awesome immediately, and something we could develop into something even better. But immediately, using the bass line of one guitar, you could tell it was going to be awesome.

Lamb: When you’re in the writing room and you’re hearing a really bare bones riff that someone wrote just before practice, the day before, or something they’ve been working on, if it’s catchy at that point, you’ve got something. You’re right, if you’re listening to a full production, you can hear everything and there are things you can lock onto if something isn’t the catchiest. But this stuff was catchy from the minute we heard it in a basic unpolished way. If I’m walking away from the jam spot and singing a riff, or if it’s still with me by the time I get home, it’s going to be good.

Considering the whole “Stay Tech” thing, do you guys have a so-called “technical minimum” for material if it’s to be included in an Archspire song?
Smith: When we’re playing, it can feel that something that feels like a slower part is actually crazy fast when you hear the finished mix. So, it’s relative. It’ll be a slower, hooky part for us, but with really extreme stuff and blast beats underneath, it doesn’t seem slow.

Lamb: There’s a really weird thing we get where, if I watch a live video of us, it’s, “Are we playing faster than the album? It sounds insane!” It’s like when your brain subdivides riffs or you’re forced to listen to things in different ways that different things emerge. If you’re listening to an album in somebody’s car where the production might sound bassy or whatever, you’ll pick out things you hadn’t noticed otherwise. In the studio we’d be like, “Is this part boring?” You put it on in a car a few months later and it’s, “Nope!” In fact, sometimes it might be too much. And that’s one of the reasons we write short albums. We don’t want to overstay our welcome. If we write an hour of 350 bpm tech death, no one is going to make it to song 13 or whatever.

“SOMETIMES IT MIGHT BE TOO MUCH. AND THAT’S ONE OF THE REASONS WE WRITE SHORT ALBUMS. WE DON’T WANT TO OVERSTAY OUR WELCOME.”

Smith: At the same time, it’s important to say, “This is our sound and this is what we’re doing.” There’s no plan to drastically shake things up at all.

Was there any issue with you crossing the border to record at Flatline Audio in Colorado?
Smith: Getting ready to go on that flight was kind of sketchy. We all knew we had to go with Dave and we didn’t know what the border was going to be like, so we were thinking, “Who do we know in Canada?” But we decided to figure it out and stick with Dave. There was nothing, no problem going through US customs and we had to quarantine after getting home, which was a bit of a bummer, but it was all right. Dave knows our sound so well that he’s like the sixth member when it comes to finishing the writing, the producing, and all that. I couldn’t imagine going with anyone else.

Lamb: For a minute we thought, “Maybe we should stay in Canada,” but going to Quebec at the time was just as bad as going to Colorado. It was all a small price to pay to go and record with the best producer ever.

“HE SOMETIMES MAKES US FOOD ON TOUR AND IT’LL BE THE BEST MEAL I’VE EVER HAD.”

What can you tell us about the online cooking show you guys host?
Lamb: [Vocalist] Oli [Aleron] hosts a cooking show called Good Morning Handsome on YouTube, and it was something he was wanting to do since 2010. We originally filmed some stuff at our drummer’s uncle’s place back then and lost the footage. Then, we tried it another time and it didn’t work out with a buddy who was supposed to edit it. Finally, I was like, “I’ve gotten better at editing, let’s try it out again.” We filmed it, it took me a year to edit, but the end result was so funny, stupid, and super fun. Oli’s such a great chef. He was brought up on a crazy type of diet, his family are really into cooking, and they all have these built up skills over the years. He sometimes makes us food on tour and it’ll be the best meal I’ve ever had. We’re going to get back into the kitchen pretty soon. We just hit a production snag with the location.

And how did Jason Momoa come to be a fan and friend of Archspire?
Lamb: He became a fan after he heard the song “Calamus Will Animate.” Vancouver is like Hollywood North and Oli’s brother works in effects and his brother’s buddy is Jason Momoa’s personal guy. He had Archspire on one day, and Jason’s like, “Holy shit, what the fuck is this?” Then, he called Oli while we were on tour, and Oli went to his hotel and started teaching him vocals and how to do all this stuff and it just bloomed from there. They became buddies and would hang out whenever he was in Vancouver. He came and saw us at a show once and it was weird. I don’t know about you, Jared, but I was nervous.

Smith: Yeah, I was and I’m never nervous when we play live, but I was then because you could see him. He was up in the balcony and you could just see this giant man by himself in the balcony. It was weird and distracting having Khal Drogo up there. It’s like he’s up there having a good time and I’m down here thinking about all this.

Lamb: It was nice to meet him, he seems like a nice guy. Him and Oli worked on a project for the show See, and he invited a couple guys to come be extras on the show. It’s nice to have experiences like that where you can say, “Oh, so that’s what it’s like to hang out with one of the richest movie stars in the world.”