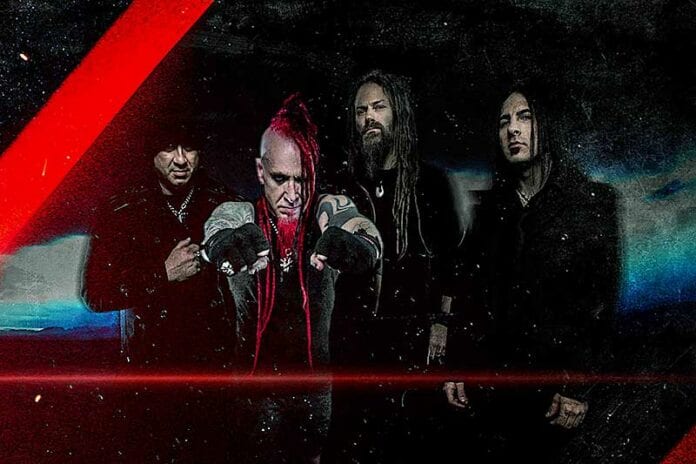 It takes great strength and determination to move on after a loss. But how do you continue when someone so integral to a band has died? Hellyeah is still trying to figure this out.

Legendary metal drummer and founding member of Hellyeah, Vinnie Paul (Pantera, Damageplan), passed away from heart disease in 2018 during production of the band’s new release, Welcome Home. Paul finished tracking drums for the album prior to his death, so what listeners hear are his final recordings.

Tom Maxwell, lead guitarist of Hellyeah, misses Paul everyday. He does not know what comes next for Hellyeah, but he is trying his best to carry on in honor of his brother and mentor.

How has Welcome Home been different than previous albums, whether it be from the recording process or how it sounds?
Obviously, the biggest difference is losing our drummer right in the middle of it. I don’t think there’s really that big of a difference when it comes to how we did it. I think for us, just having quality songs was always the main focus. We could easily go in and write the same record and just take off from what we did before, but I think with every record, especially for me, I want to feel vulnerable and uncomfortable after we do it. I don’t want to feel certain about it. Like the typical, “It’s the best record we ever did!” type of shit. I literally felt like, “I don’t know if this record is any good. I don’t know if people are going to like this.” I found comfort in that because I knew that we were going outside the box and doing different stuff. But as far as the makeup of it, we had Kevin Churko producing again. This is our third record with him. There was that sense of comfort there because we know each other and we know how the other works. The biggest thing was just trying to finish the record after Vinnie passed. That was the biggest struggle.

This album seems more reflective. How would you say that has helped you evolve as a band?
I think we’re still trying to figure out if we’re evolving. The biggest challenge was not just finishing the record, but continuing after Vinnie, and whether I wanted to do it or not. It wasn’t a matter of whether I could. It was just a matter of whether my heart was still in it. For me, that’s still the biggest struggle. My love affair with touring and being a part of the whole grind has suffered greatly from losing him. If we are evolving more emotionally and just trying to take those steps to heal, we want to be able to get back out on tour and be excited about it. The tour we just finished was our first in two years. It was our first tour without Vince ever, and I was emotionally crippled. I was almost vomiting every morning leading into it just because of my nerves, anxiety, and fear levels were at extreme heights. I think down the road if and when we ever do another record, it’s gonna be completely different. That’s going to be the big test. Vince is not gonna be there. I’m not going to go in there and write songs and have somebody go, “What would Vinnie play?” It can’t be that way. It would have to be an evolvement.

On this last tour, Roy Mayorga from Stone Sour played drums. How has he been able to incorporate Vinnie’s style into your live sets, and what made him the best choice?
I’ll start with the last question. What made him the best choice was that we are all brothers. We’ve known each other for a long time. Hellyeah and Stone Sour toured together back in 2010 and have played countless shows together since. There was a connection and friendship that was already there. We needed a guy who would always lend a generic Viagra 100mg. We knew that Vinnie loved him and respected him as a drummer and as a person, so that was important to us. We really needed to find somebody who the fans were going to be accepting of. That was a big, big thing for us. For us to get some hotshot dude who is known for good drumming but nothing else, that just wasn’t gonna cut it. You need to have somebody the fans are going to be like, “I can see that happening and I’m cool with it.” That’s exactly what’s been going on with Roy. They’ve welcomed him with open arms, and he’s been doing great. He’s learned the songs and he was practicing like six hours a day learning our stuff to get every single thing perfect. But we told him to incorporate his own style and make it his own. He’s been doing that and has been doing great. We could not be more happier.

How has the response from fans been about the new singles you have released?
I was pretty shocked actually. “Welcome Home” has really been doing great. It’s sitting in the Top 5 in Active Rock Radio right now, which means people are really liking it and they’re spinning it. “Oh My God” wasn’t really an official single, we just kind of threw it out there. It’s taken a life of its own. We have been playing it live, and I have been blown away at the explosion of the crowd when we kick into that song. They know every word to it. It’s fantastic.

Do you have a song off Welcome Home that you’re most proud of?
I think my favorite song that I feel most proud of would probably be “Skyy and Water,” even though it’s a pretty somber piece of music. It was written for Vince. It was our letter to him. It’s our way of trying to tell him how much we miss him and how much we love him.

How have you seen Hellyeah progress as a band over the years, not only in sound but overall?
I look at this band as two parts now. The first part is us with the original lineup until the first record Hellyeah, the second record, Stampede, and then the third record, Band of Brothers. That’s the first half of the band. I loved the first record, but I felt extremely detached from the second and third albums. The type of music we were playing wasn’t really my cup of tea. I think there’s good stuff. There’s a couple of songs on those albums that get a hall pass from me, but I don’t think the band really became what we are now until our fourth album, Blood for Blood, when we got our other guitar player, Christian [Brady] and our bass player, Kyle [Sanders]. I think that period was the biggest milestone catalyst. That’s really what I love about this band now. We’re writing and releasing the type of songs that I’ve always wanted to do with this band. We’ve become the band that I’ve always wanted us to become. I think we’ve matured in a lot of ways. Not only musically, but also as people and as brothers. We started out wild, crazy, and alcohol fueled, not really giving a shit about tomorrow. We were just living in the moment. Over the years we’ve kind of pulled the reins back and really started tightening up everything. Now that Vince is gone, we really had to buckle down and pull ourselves and our emotions together to honor him and this record. That’s what our focus is right now. We’re still very much brothers, but there’s a struggle there. We’re still trying to find our footing and trying to see if we can we can still do this without him. I mean, we know we can, but the emotional side of it is a big thing. I’m hoping that we can figure it out. I have faith that we will, but it’s going to be a long ride.

What comes next for Hellyeah?
The only thing we’re focusing on right now is honoring this record, touring it, and honoring Vince with every show that we play. Kyle said it best, “Whatever doors the universe puts in front of us, we’re gonna have to go through, whether it’s good or bad.” So, we’re just gonna have to see. I can’t really forward think that far ahead. Whether there’s ever going to be another record, I don’t know. Would I like to do one? Sure. Am I ready to do one? No. It’s too early to say anything. We’re just gonna take this one day, one tour, one song at a time right now. We’re just lucky enough that we found somebody that is a brother who is going to be there to help us and step into that drum world and help us get through. There’s no way we could have done it with anyone else. It’s kind of cosmic.

“KNOWING THAT THE FANS WERE THERE, READY AND WAITING FOR US TO COME BACK, HAS BEEN A HUGE MOMENTUM BUILDER FOR US.”

Is there anything else you want to add?
The only thing I want to put out there is directed to our fans. Thank you for being so patient. Thank you for being so loving. And thank you for being there for us, because without the encouragement, amount of love and acceptance, and support that we’re getting from them, I don’t think we could’ve done this. I don’t think we could’ve gotten back out on the horse and continued on. I think knowing that Vinnie would want us to keep going was one thing, but knowing that the fans were there, ready and waiting for us to come back, has been a huge momentum builder for us. I just want to say thank you to everyone.