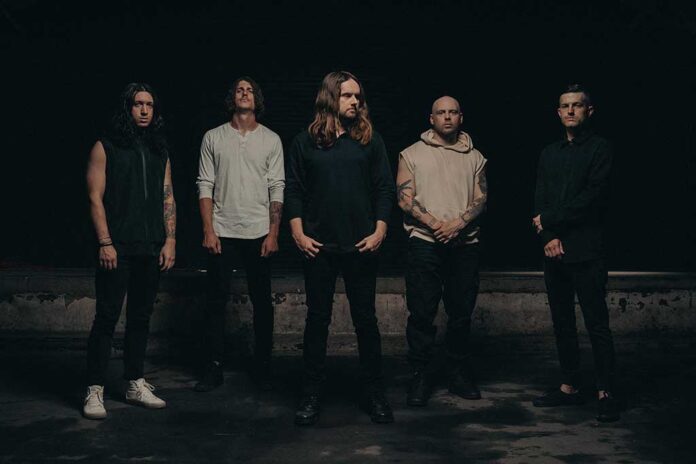 Since 2011, metalcore band Fit for a King has had a glorious run since they emerged out of Texas with their signature style of hardcore and metalcore colored in with hypnotic hooks. Their 2019 release Dark Skies not only brought out some of their heaviest material but also the most intense heading up towards their new release, The Hell We Create. Not just because of their characteristic contentious guitar lines, but because they tackled the themes of depression, anxiety, politics, and religion, unlike any other effort up to this point. Now with The Hell We Create, Fit for a King takes on a new kind of depth. Reflecting on the events of a near-death experience of a stroke that happened to vocalist Ryan Kirby’s wife, the adoption of their children, and their past, Fit for a King treads new lines of personally illuminating and instrumentally evocative. For the band, these two albums have evolved their careers moving forward.

“Dark Skies showed us that people enjoy us talking about uncomfortable topics,” Kirby assesses. “A lot of people are going through difficult things. Most of the time, there is nothing wrong with emo music. I enjoy it, but emo music has a sound to it. It’s like My Chemical Romance, where there is a singing dominance to it. People like that emotionally heavy quality. Heavy music tends to be about being brutal and strong. This is heavy music mixed with that vulnerability. We didn’t do that as much on The Path because we were feeling good and we were not really in that mindset. The pandemic took us back there again, but even more so. We learned as a band that just because we write something vulnerable doesn’t mean it has to be soft. It’s all about balance, emotionally and musically.”

“JUST BECAUSE WE WRITE SOMETHING VULNERABLE DOESN’T MEAN IT HAS TO BE SOFT. IT’S ALL ABOUT BALANCE, EMOTIONALLY AND MUSICALLY.”

While The Hell We Create and Dark Skies share a similar emotional vulnerability, the creative process went beyond its normal bounds to produce the new release’s vision.

“While we retained a lot of our sound instrumentally, a big change musically is having a subject matter for a song and having the music reflect that emotion. I want that music to feel that emotion without any words,” reflects Kirby. “We didn’t want the songs to sound a certain way and then throw lyrics on them. I wanted the music to register that emotion before lyrics were added to it. So, that was something huge. Every song’s music was written first, and we wrote the instrumentals to fit the subject matter. It was like if this was a sad song, I wanted this music to make me feel sad. Lyrically, I feel like Dark Skies was talking about big changes in my life and current struggles, such as anxiety and stuff—flare-ups here and there. The Hell We Create talks about me living in anxiety. It was not just a phase. The anxiety, stress, and struggle were every single day for well over two years. There was a big difference between recalling events versus actually living through them the entire studio time.”

When talking to the renowned metalcore veteran, there is a sense of expertise and confidence that goes along with opening up in a deeper sense of direction. Ryan Kirby finds comfort in his band members when it comes to revealing the most intimate aspects of himself to the world, despite the fear that comes with each new album being that much more open with their audience.

“I AM OPENING UP TO WHO I AM AND THE STRUGGLES I AM FACING NOW.”

“While I worry about being vulnerable, my band pushed me to be vulnerable, especially through the pandemic.” Kirby candidly admits. “I worry about being vulnerable. Even though I take criticism well when it comes to our band, it’s hard to be completely vulnerable when people criticize completely sincere lyrics. It’s hard to handle that because I am putting myself out there, unfiltered. Whereas before, it was, ‘Oh well, that was something I was going through three years ago. If they feel that is me now, I don’t identify with it anymore.’ It’s almost like a shield, that was the past. I am opening up to who I am and the struggles I am facing now. If people think that is stupid, lame, or they don’t like it, well, I don’t know what else I have to give.”

The energy between album releases had become dispersed over the years. Dark Skies and The Hell We Create established continuity and a more cohesive future direction for the band, not only lyrically but also through the band’s soundscapes.

“I tried to push myself with the lyrics this time around. I wanted a more poetic feel to them. I look at some of the lyrics from the past and I cringe,” Kirby laughs. “I want to fix this for when my kids are reading these on paper moving forward. My daughter likes to write poetry, even if she won’t admit it. I showed her some of the lyrics, encouraging her, showing some lyrics I have written in the past and some that I am proud of,” he smiles. “You’re not going to be proud of everything you write, but I would not have gotten here without writing all this other stuff. Dark Skies and The Path were records that were trying two completely different things. ‘What do we enjoy playing live?’ People don’t normally think of that side of things. ‘What will people enjoy and have the most fun singing back to us when we are on stage?’ Plus, a mixture of what we want to play in the studio. The Hell We Create is taking everything we have learned from Dark Skies and The Path and what people seemed to enjoy from both of those records and combining it into one experience. Before all of that, we were just so young. We had not even toured yet. We were trying to figure out how we could do this for a living or even make it as a household name band. When you are that small, you are just throwing things at a dartboard, and eventually, one of your songs catches on.”

“WE ALL HAVE A LOT MORE IN COMMON THAN WE ALL THINK, ESPECIALLY WHEN IT COMES TO COPING WITH STRESSFUL AND TRAUMATIZING EVENTS.”

Finally, Fit for a King wants people to walk away from The Hell We Create knowing that they can reach out for help even in their darkest hours.

“I want to raise self-awareness,” he leaves off. “Writing this was therapy for me, and I hope it will be for others as well. We all have a lot more in common than we all think, especially when it comes to coping with stressful and traumatizing events. I’ve learned trauma or abuse is passed down from person to person. It’s not just important to fight for ourselves, but we’re fighting for others. You can reach out for help even if you’re scared to. I know I was. I hope we can all reflect on not only what we put ourselves through, but what we put others through as well.”