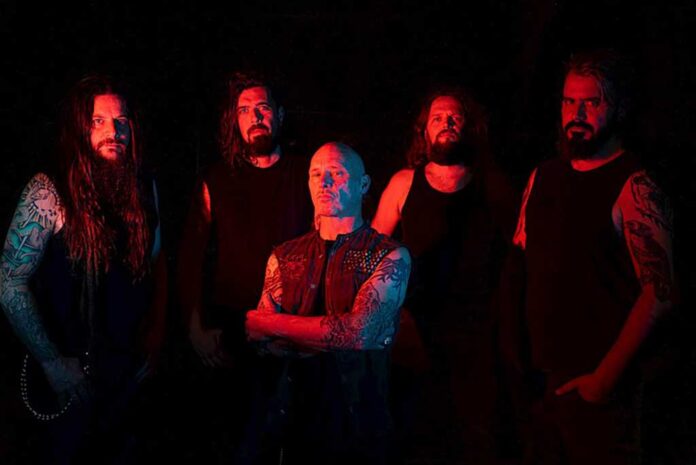 It takes a group of seasoned musicians to bring about the tenacious yet aggressive sound that Bark brings with each release. With three albums under their belt, guitarist Martin Furia claims that their distinct sound is inspired by everyday life. As he sits relaxed on his couch in his Belgium home, under the comfortable glow of his living room light, cooking dinner for his children during this interview, you can believe this all to be true. These experienced musicians have developed a solid reputation, constantly evolving their intensely aggressive wall of sound, yet their inspiration derives from the most ordinary of places.

“OUR UNIVERSE TRULY COMES FROM ALL WALKS OF LIFE WITH THIS TYPE OF DARK GOD AND THE METAPHYSICS BEHIND OUR BAND.”

“It’s just everyday life,” Furia laughs, then smiles warmly. “Everything can be turned into a song or can be represented in lyrics. Many times we start with an idea that you wouldn’t think could be musical. It can be a topic or some situation that sparks a chorus, and we start to build around that. Or sometimes you have a really great riff. My phone is full of them. It really can be anything. We have such a broad musical palette, we are not cornered anywhere. The cool thing is that it always sounds like Bark. It can be anything, but it still sounds like us. I feel that with our sound, we can get away with a lot. Our universe truly comes from all walks of life with this type of dark god and the metaphysics behind our band. Sometimes it’s a story with a fictional character, like in “Dead Man’s Hand,” where it’s a gambler or something like that. It can be things that happen to us or friends of ours—inspiration comes from everywhere. The great thing is that we like so many different things. We know each other so well by now that it always ends up sounding like us.”

Creatively, Bark has shown since 2014 that they always capitalize on the heavy and unique melodic soundscapes that have been prevalent in all their releases. Bark’s new album on Listenable Records, Rambler of Aeons, delves into an instrumental sea of extremes. Musically, in melody and brutality, Bark aimed to push beyond the boundaries previously explored in other records. Wanting to showcase a heavier sound that still displayed their dark and emotional qualities, Bark drew on influences ranging from Motörhead to Black Sabbath.

“Melodically, we have distinct things that we like. Speaking in musical terms, diminished, harmonic scales always sound good to me,” Furia responds. “It always ends up being something like that. But with time, we have developed more of a personality. There is one riff in ‘Underworld,’ that is such a long riff. It’s such a simple riff, but it’s so grim and badass. I love it. There are some of these in Voice of Dog. I like these long melodies that sound mysterious. I love Black Sabbath, I think it comes from there. We changed the lineup a few years ago, our guitarist Toon Huet has all these extra credentials. He studied Jazz and stuff. He studied at a conservatory, so he really knows his stuff. I am more of a self-taught guitarist. When we get together, he finishes what I start, it’s great. Sometimes the melodies sound too polished,” laughs Furia. “So sometimes we push it further, to make it more heavy and intense. But he’s great. We are a great team, all of us. I am a record producer, so I can make things sound more professional. We all get together to demo out 12 or 13 songs, but there is always room for one more last minute song (laughs). It’s always unexpected, but we expect that kind of thing to happen.”

Lyrically, Bark is not afraid to explore uncharted territory when it comes to themes of death. A recurring theme in the band’s lyrical structure, they strive to deepen that meaning with each release.

“THIS ALBUM IS SUPER CONNECTED TO DEATH. IT’S BOTH METAPHYSICAL AND VERY REAL”

“Bark talks a lot about death and all the ways that it can happen,” says Furia. “We play around a lot with this theme. We have songs ranging from drug abuse to gambling. Our music is always very deep and antiheroic. We wrote this during the pandemic or towards the end. We finished the album in April of 2020. The big difference is that a lot of friends died. The death was very real. I lost a couple of friends, one of whom, if you listen to our albums, has a Spanish speaking voice. He was the Voice of Dog. He, unfortunately, passed away. He was a fantastic artist, and his lyrics were amazing. This is the Rambler of Aeons—that is why there is no Spanish picking on this album, and there won’t be anymore, because it was all him. It put the universe of Bark in a completely different place. This album is super connected to death. It’s both metaphysical and very real. In songs like ‘I’m Here for Rock n Roll,’ the guy is on a suicide spree, ready to crash and burn. He doesn’t care if he’s going to die. He just has Motörhead blasting through the speakers, and that is all he needs. We have these pretty comedic themes surrounding death, as well as very serious topics surrounding it. It’s a deep album. It may be a little artsy fartsy for some, but it’s emotionally powerful. We also have songs like ‘Kid Giant,’ which is loosely based on a tale by an Argentinian writer, Jorge Luis Borges. It’s a story about him finding himself when he was younger, and they have a conversation. It begs the question, ‘Are you really being the person you want to be?’When you are a kid, you have all these dreams. What do you do with that as you get older? Did you fulfill those dreams? It’s almost like that kid is staring back at you, saying, ‘Did you betray me? Or did you do the right thing?’ So we play around with those types of situations and emotions as well. Bark is very cynical, yet funny in certain ways.”

Rambler of Aeons touches on a different kind of profound and raw approach to the band that is not only evolutionary but also a sense of achievement as a band.

“We are all very good friends, and this album brought a great sense of accomplishment. After we record a song, we talk about it. When we write lyrics and finish them, or when we listen to a song, we start to feel all these deep emotions. We talk about the past and the future. Songs like ‘Still Walking,’ for example, talk about loss. We’ve all lost someone. When you go through that, you never feel the same. But you still have to go on and be yourself. In the end, all you have is you. When you wake up in the morning, it’s just you. You have to face yourself, put yourself together. We all walk to the grave in the end, that’s it. Our albums always approach the same themes. It’s life and death and all the nuances in between.”

JOHN 5 AND THE CREATURES: Risky Business