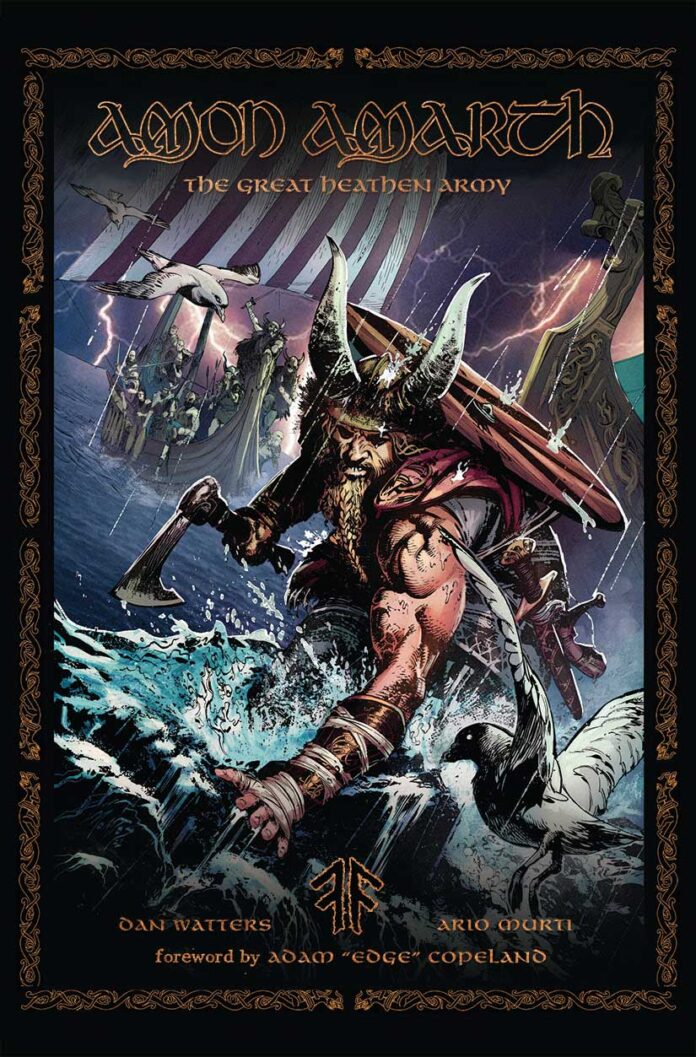 Z2 is proud to announce Amon Amarth: The Great Heathen Army, a new graphic novel and board game collaboration celebrating the heavy metal quintet’s last album of the same name. Channeling the thunderous epic poem winding through these nine tracks, the graphic novel dives into the heart of the Viking Age, as oars propel longships to shores awaiting the brutal collision of steel and bone.

“Heathens from shore to shore! We are thrilled to announce that we’ve partnered with Z2 to bring you The Great Heathen Army as a full-length graphic novel,” Amon Amarth explains. “It’s a brutal story of war, bloodshed, and glory during the time when the Viking raids brought terror to the shores of England. We’ve also produced an accompanying replica of The Great Heathen Army board game that you see in our music video of the album title track. We hope you enjoy it. Skål!”

The pages of The Great Heathen Army unspool throughout a 9th-century battle siege, in which a coalition of Viking warriors from Scandinavia invades England, wreaking unprecedented chaos. The tale dynamically pivots between large-scale dioramas of destruction to the lives of the men and women whose decisions leveled populations, capturing the devastating human cost to both sides of this legendary clash. The book will also include a foreword from professional WWE Wrestling Hall of Famer and Viking devotee, Adam “Edge” Copeland.

“Getting to work with Amon Amarth on The Great Heathen Army means diving into myth, history, and heavy metal, which sounds like a perfect date night to me,” Watters explains on the writing process. “Our aim with this book is to make the reader feel like they’re truly there, facing the terror of the invaders in that old world where monsters and gods lurk beneath every stone and in every bloodthirsty eye. And also to show some Vikings doing some terrible things with some very big axes.”

Since 1992, Amon Amarth has elevated metal into a primal onslaught of increasingly blistering albums. The Swedish group channels the awe and fury of a Medieval Viking raid into a horizon of bass-pedal-lined, chugging anthems destined to ignite chaos at live shows the world over. The group’s latest full album, The Great Heathen Army, punctuates 30 years of reaving hooks with a concept album about sea-ward ravagers clashing with swelling armies—and the generals who continually grind the cogs of war.

“Amon Amarth are well known for their historic epics and mythology, woven throughout the band’s history,” editor Rantz Hoseley continues. “A graphic novel inspired by their music feels long overdue. The songs of The Great Heathen Army conjure a saga in the listener’s mind, ancient and timeless and powerful, and it’s our honor to expand upon that bloody experience.”

Z2 and Amon Amarth present The Great Heathen Army in standard hardcover and deluxe hardcover editions, set to release in Fall 2023. The deluxe hardcover will come signed with three art prints illustrated by Tom Thiel, a Silver Pennigar Viking Collector’s Coin, and a limited edition board game with an oversized battle map.

The Great Heathen Army board game will also be available separately. In the deck-building war game, players assume the role of the Vikings on the attacker’s side or that of the Anglo-Saxons on the defender’s side; each side will strategize their own goal to defeat or repel the other in absorbing, hours-long campaigns.