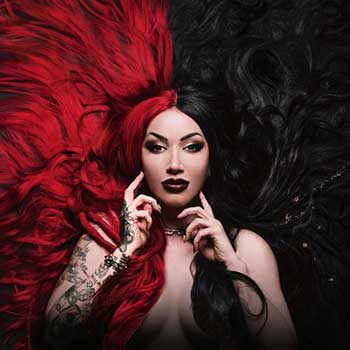 POP METAL: Shifting its collective focus from past heartbreak and struggle to empowerment and progressive lyrical storytelling, New Years Day has crafted a near perfect album inUnbreakable. Ash Costello and company come out swinging with “Come for Me,” an early single from the record and listeners’ introduction to the new and improved New Years Day. This collection could not embrace the record’s title any more strongly, as tracks like “Nocturnal” and “MissUnderstood” are absolutely all guns blazing. “Done with You” reinforces Unbreakable’s goal of encouraging the listener to stand up for themselves, choosing to highlight strength and boldness rather than soak in past mistakes and pitfalls. As one of the best leads in music today, Costello’s voice is more commanding than ever, mastering a high wire act between soft vulnerability and an unstoppable march of material that feels more genuine than ever before.

This record simply never lets up, and though Costello has been the only mainstay since the band’s 2005 inception, the addition of Austin Ingerman on lead guitar (with Nikki Misery and Frankie Sil) shakes up the tried and true instrumental arrangements that has defined New Years Day, opting for heavier and catchier. With the production helmed by Mitch Marlow (In This Moment) and Scott Stevens (Halestorm), it’s no wonder that Unbreakable has taken a decidedly left turn from 2015’s Malevolence into what Costello calls pop metal, as the band spent the majority of 2018 on tour with Halestorm and In This Moment. This change not only solidifies Costello and crew as adaptive giants in this scene, but further proves their merits among larger stadium rock acts, a venue in which Unbreakable will surely usher them into.

More vulnerable moments like “My Monsters” remind the listener that thoughUnbreakable is a major step forward in the New Years Day story and sound, Costello is still willing to lift the mask of confidence and reveal what has made her so relatable for so many years. Clocking in with 12 tracks, New Years Day gives us just that little extra sweetness in “Nocturnal” and closer “I Survived.” Unbreakable is a punch to the throat and the band’s best offering to date. This record is utterly flawless and will be noted as New Years Day’s official entry into the upper echelons of rock royalty. ~ Jameson Ketchum

GLORYHAMMER: Legends from Beyond the Galactic Terrorvortex﻿