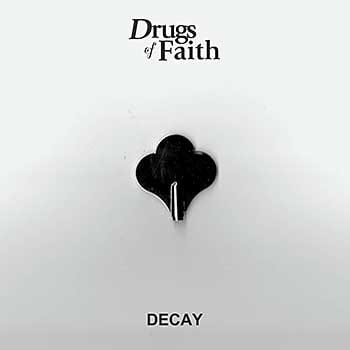 GRIND ‘N’ ROLL: For better or for worse, this Maryland trio has carved out a niche for itself in underground grind circles with a sound that, as the descriptive dek might have hinted at, combines the fury of grind with more rocking elements. I say, for better or for worse because some people just can’t handle their grind being un-ground in any way, shape, or form. Others, however, enjoy flying in the face of convention and welcome the sound of something different. Those are the folks who can get down with Decay making use of a scalding midrange tone, predominately clean and annunciated vocals, and what appears to be a natural, un-triggered drum kit in the delivery of some of the most non-oppressive sounding grind you’ll ever hear. That’s not to speak negatively of what’s at work here as it is to point out where the five tracks comprising this 7-inch hold difference.

There are moments where lone guitarist (and vocalist) Richard Johnson’s trebly tone leaves too much space for what’s being executed, like the mid-paced slash ‘n’ chug of “Decaying,” whereas in other spots, like the noise and math rock references in “Anonimity,” the clarity is welcomed and refreshing. I’m immediately drawn to the punk/thrash progression and ascending/descending riffs in “Collective Punishment” as they are infused with Raw Power—the band and the sentiment! However, the experience is of the opposite during “Nihilists,” which could have been helped greatly with some sonic density and a drum sound with a tighter, less booming snare. “Construction,” on the other hand, sees all the elements coming together to propel a catchy sustained verse-chorus-bridge section that straddles death metal, punk rock, and avant-garde experimentalism.

In that sense, Decay is much more than antagonism directed at the narrow-minded. There are moments of revelation that indicate this is a band truly onto to something of its own, even if the details are still being hashed out by its creators. ~ Kevin Stewart-Panko