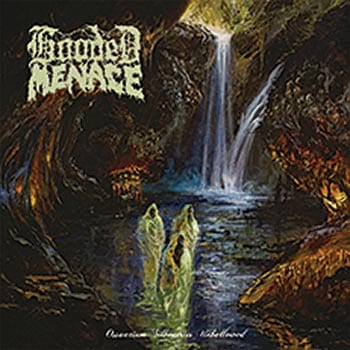 PURE DEATH DOOM BLISS: Finland’s Hooded Menace has always threatened its audience with something of a masterpiece, but this is as close as the group has come to creating a modern classic—an absolute epic of pure death and doom bliss. Ossuarium Silhouettes Unhallowed is the fifth Hooded Menace album, and there isn’t much to differentiate it stylistically from the band’s prior efforts. There is still that musty, nostalgic smell of doom metal’s past, dripping with the cinematic influences of Spanish horror and Italian giallo flicks. What separates this album from prior efforts, however, is how it never relies upon that nostalgia as a crutch. Instead, the band clearly has its creative minds focused in the present day, with an ear cocked firmly to the past. This can be heard not only in the clear and powerful production, but also how the band approaches its songwriting. The rhythms are varied and not always mired in slow motion for the sake of being lethargic. There is also a bevy of riffs to keep things interesting, mixed in with morbid melodies, female vocals, and acoustic guitars. Make no mistake, Ossuarium Silhouettes Unhallowed is the furthest thing from a commercial pitch, but rather the sound of a band doing all it can to mine its sources of inspiration for something that can truly be called its own. ~ George Pacheco