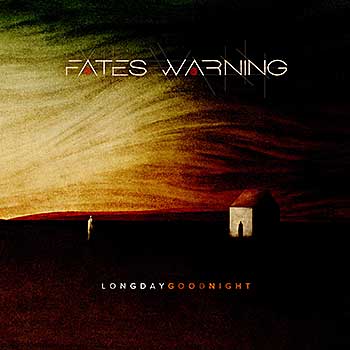 Opener “The Destination Onward” takes a while to get going with its brooding buildup, but once the menacing riffs, slamming tom fills, and Ray’s piercing, melodic vocals begin, the listener is quickly assured that this is 100 percent Fates Warning. “Shuttered World” is heavy, progressive, and melodic all at once. “Alone We Walk” and “Now Comes the Rain” contain some of the band’s modern proggy influences, while the 11-plus minute “The Longest Shadow of the Day” introduces jazzy segments and Pink Floyd-esque passages. Album closer “The Last Song,” with its Spanish Flamenco guitar picking and melancholic melodies, is the perfect ending to the record. Throughout the album, there is a great mix of tracks with a metallic edge (“Shuttered World,” “Scars,” “Glass Houses”), ethereal and melodic interludes (“The Way Home”), a ballad-esque track (“When Snow Falls”), and an almost grungy track (“Begin Again”) that lends to the album’s intense diversity.

There are also ample melodic buildups and dramatic dynamics within each track, while the song structures and songwriting are some of the band’s strongest of its career. Plus, Ray is in tip-top shape, as his vocal harmonies are on the money. Joining the band once again on lead guitar is Michael Abdow, who appeared on one track on the band’s last record and adds some fantastic solos here. In addition, ex-Porcupine Tree drummer Gavin Harrison guests on “When Snow Falls,” who is very familiar with Matheos, as he played in his OSI project.

In this current world of short attention spans, the album is noticeably long at 72 minutes in duration and it takes an effort to soak it all in. However, the songs are more straightforward and accessible than previous releases, which makes the album fly by nicely. Produced by Matheos and mixed by Joe Barresi, the pristine and polished tone brings out the terrific dynamics in each track. Fates Warning has enjoyed a long and illustrious career within the prog metal world, and the monstrous Long Day Good Night proves that the band still has what it takes. ~ Kelley Simms

ACCEPT: Too Mean To Die