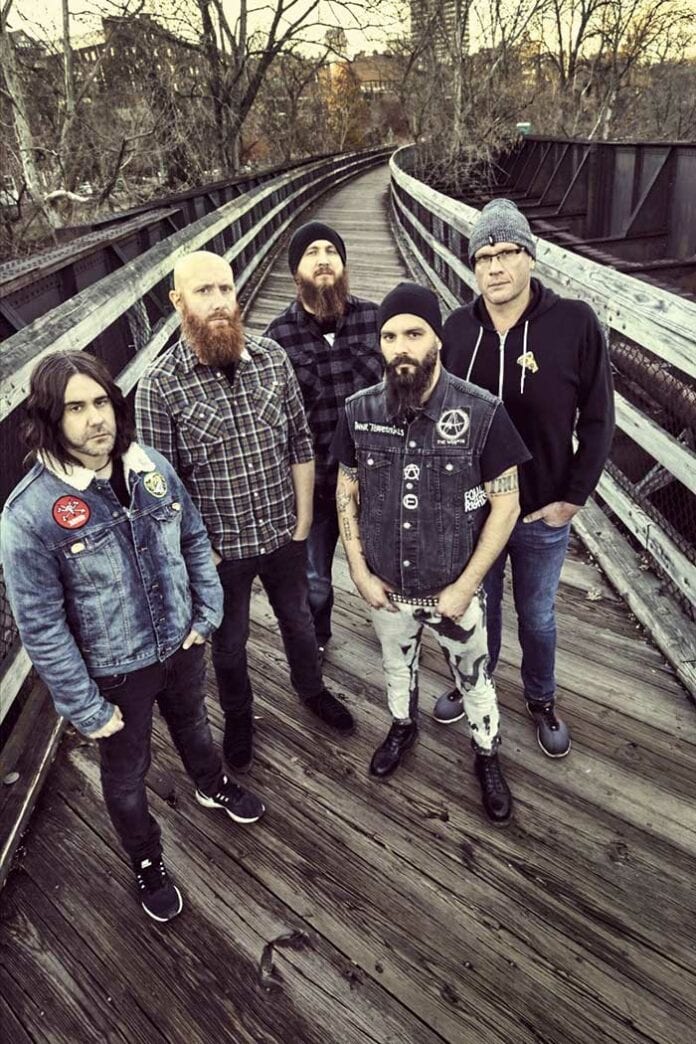 Metalcore mainstays Killswitch Engage was born in 1999 out of the ashes of two prominent Massachusetts metalcore bands—bassist Mike D’Antonio from Overcast (which also included future Shadows Fall vocalist Brian Fair) and guitarist Adam Dutkiewicz (who switched to drums) and guitarist Joel Stroetzel from Aftershock, as well as vocalist Jesse Leach from Nothing Stays Gold.

The band has endured numerous highs and lows throughout its 20 year career. Releasing a demo in 1999, followed by their self-titled debut full-length album the following year, Killswitch Engage received interest from Roadrunner Records and soon signed a recording contract with the storied music label. Following its second album, Alive or Just Breathing, Dutkiewicz moved to guitar, former Aftershock member Tom Gomes took over drumming duties, and the band morphed into a quintet. In 2002, personal problems lead to Leach’s departure, and Howard Jones joined the band for nine years until he left in 2012 when original vocalist Leach rejoined.

Atonement was recorded over a two year period and at different studios. Was there anything you wanted to focus more on with this album compared to previous albums?
We always go into it just with the mindset of let’s write some fun new music with every record. This one just took a little bit longer to produce because we were so excited that we wrote too many songs. Which isn’t a bad thing until you hand them over to the singer and he just freaks out and can’t wrap his head around 21 songs as opposed to 11. It’s very strange that it did take a long time and just the fact that Jessie was feeling a little bit overwhelmed. My bass tracks I did on the road. I thought I was going to help save time by doing my bass tracks in dressing rooms on the road and in hotel rooms. And unfortunately, it worked against me because the overall sound of the bass had to be really adjusted because of me just playing a little light some days or a little heavier some days. I’ll probably never do that again.

“The Signal Fire” is a great track that has former vocalist Howard Jones guest singing on it. Fans have been really excited about it. How did this song come about?
We’re stoked that we could make people happy. We have a really good relationship with Howard. We always have, we always will. Stuff happens in a band and stuff just didn’t work out with him in it. So, it was time to move on. He has done great things with his other band [Light the Torch], and we couldn’t be happier for him. I know when I heard “The Signal Fire” originally, everyone was passing around the idea that this really sounds like a Howard Jones type song or a song that I could hear him on. I remember sitting down to do my final bass tracks and Adam said, “Hey, guess what? Howard sang the song, check it out.” And this is a song that is harder than normal to play. But this one jumped out at me and I immediately thought, “Oh crap, now I really have to actually learn this song.” We couldn’t be happier that he could do it.

“WE ALWAYS GO INTO IT JUST WITH THE MINDSET OF LET’S WRITE SOME FUN NEW MUSIC WITH EVERY RECORD…WE WERE SO EXCITED THAT WE WROTE TOO MANY SONGS.”

The camaraderie and smiles in the video really seemed genuine.
He agreed to come down and be in the video, which was really cool. We had seen him on tour a bunch here and there, but never like hung one on one. It was cool just hanging as friends again, and it really brought back some cool old emotions, hanging with him at the video shoot, because I’m really psyched that he’s got everything together and he’s doing it again. He looks fantastic and he sounds better than ever. It really seemed genuine. There were old jokes that hadn’t been brought up in years, and I think you can see that on the film.

Testament vocalist Chuck Billy guests on “Crownless King.” How did you get him to participate on this song?
It was done before I knew it. It was something that Joel had been pushing for. He heard that song originally and said, “Chuck Billy needs to be on the song. I don’t care what we gotta do. We gotta figure out how to get him on here.” And I think Adam flew up to LA to record Chuck for a day. He did an amazing job. I can’t believe that guy’s timbre in his voice. It’s thunderous! I couldn’t be more stoked on how great that came out. And it was all a little Joel idea that sparked one night while we were drinking on the bus, and it actually worked out very, very cool.

“I Am Broken Too” deals with mental illness. This is a big topic these days and just making someone aware of it through a song is a great gesture.
I was going through a divorce at the time when I heard the song. Jesse was the one who kind of got me through that, and he just knows how to talk you down off a ledge. I heard this tune and I bawled. It hit home more than I thought it would. I think you can portray anybody’s life, really. It’s not exactly autobiographical for Jesse, but it is about somebody he knows. It’s a tough song. The video is even tougher to watch. But bringing all these things out into the forefront, like you said, getting people aware or even just making people aware that other people suffer from it too, we have been told by many people that it has helped a lot. Any way you can help anybody in this world these days is the way to go for sure.

The production on Atonement by Adam is huge. What were you going for sound wise, and what does Adam bring to the band as a producer?
Adam gets things done. If you want a no-nonsense person who’s going to tell you exactly how it feels, that’s the guy to go into the studio with. You’ve got to play that thing perfect or it’s not acceptable. Which unfortunately, it can be tough if it’s a song that you don’t know quite as well as he does within writing a bulk of the material. He obviously can figure things out pretty fast, and oftentimes I would have to film him playing a riff that I may not even understand and then just rewind it in slo-mo mode on my phone and kind of pick out here and there what to do. As far as the parts, there’s actually a beefier tone on this record than most, and I think when we handed it over… part of it was, Adam just had enough. It had been two years of churning, and you knew the record was getting on his nerves and he just heard it too much. He was like, “I can’t mix this thing,” so he passed it off to Andy Sneap. Andy has his own way of mixing and his own sound. He’s done two other records for us, possibly three, and he definitely has his own ideas of where our guitars should fit in the mix and our guys have a different idea. So, it’s a slight push and pull when we’re dealing with Andy. And with this one, I feel like maybe the guitars got thinned out slightly more than they should’ve been, but that just me nitpicking a little bit.

“WE WANTED TO GO FOR THE THROAT AS FAR AS A METAL TYPE RECORD. WE WANTED TO REALLY PLAY IT UP FOR METAL BLADE”

You were on Roadrunner for many years, but recently signed with Metal Blade Records. How did it come about to switch labels?
We owe a lot of our career to Roadrunner. In the beginning they were holding up the banner, waving it around. They helped us get a jump-start into the music industry. And here we are, 18 years later, fulfilling our record contract, putting out everything that we wanted to put out, or that we were assigned to put out with Roadrunner. We completed the contract, which no one ever does. I’m pretty stoked to put that on our little résumé of things that we actually achieved and just start fresh. This is the record that we wanted to have new looking art. We wanted to go for the throat as far as a metal type record. We wanted to really play it up for Metal Blade and give them a product that they were really happy about and that we’d be really happy about, too. Record labels are in a strange place these days. It’s more of a joint venture now than it is those guys controlling everything, at least for us anyways. Metal Blade seemed like they were going to be a great addition to the team. And so far, it’s been incredible. The rollout for the record, we haven’t seen anything like this since the early days of the Roadrunner stuff. They’re really trying to prompt us and push us up into the forefront and I could not be happier. I’m really stoked that people are into the record, that Metal Blade is excited about the record, and that we can put out a product that everyone’s happy with.

“FIRE FROM A LION’S MANE. IT’S NOT THE NAME OF THE RECORD, OBVIOUSLY, BUT AN IDEA. AND HOPEFULLY THAT IDEA COMES TO OTHER PEOPLE’S MINDS”

Since you were involved in the art direction and layout of the album, what were you wanting to achieve with the cover art from Richey Beckett, and did you give him free reign to create it?
The last three records I’ve been collaborating with other people, and it’s a lot more fun to sit back and art direct, maybe do a little design here and there. But to be able to bring everything all-encompassing into its own sort of package, the whole thing just looks like one giant package that was designed by one person. I really like the overall feel when stuff like that happens. And I’ve been after Richie for a while. He’s an amazing artist. He’s done stuff for Queens of the Stone Age, Metallica, Mastodon, and Unearth, and everything I’ve ever seen by him has been stellar and amazing. I had contacted him a whole year ago to see if he ever had free time because he’s a busy dude. We cut out a little section of his work week, and he did the cover for us and we could not be happier. But the original idea that we had going into the cover—we always discuss artwork, covers, titles, track titles, everything like that—we were bouncing ideas off each other and Joel had said, “Fire from the lion’s mane,” and that’s what I based all the artwork from the entire record on, that idea of fire from a lion’s mane. It’s not the name of the record, obviously, but an idea. And hopefully that idea comes to other people’s minds when they look at the cover.

LACUNA COIL: Releasing the Anima to the World