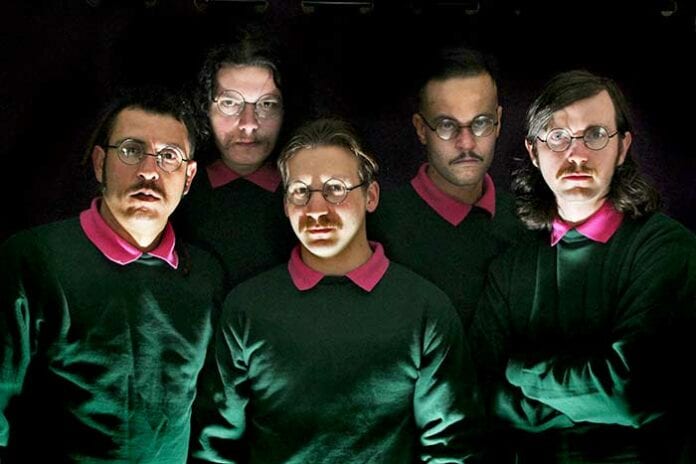 How did the idea to form a Ned Flanders based metal band come about?
We never intended on starting a band out of it, but we were just imagining the heaviest, most brutal, crazy metal band, but with the worst, most unfitting name. One of us said, “Okilly Dokilly,” and from there we talked about what if the lead singer was Ned Flanders. Then, what if all the members were Ned Flanders and what if we called it Nedal. We just took it and went way overboard with the Ned Flanders theme.

Okilly Dokilly found success before even playing your first show by reaching viral phenomenon status after releasing a few press photos and a four song demo. Did you think the band would take off like this?
Totally not. We thought the idea was funny and that we’d just play a couple of small pub shows, but it ended up being more popular than we thought. We thought that we had such a niche audience that it wouldn’t really connect with anybody. But once we put press photos online and a couple of demos, all of a sudden, the internet went nuts. And we had a lot more people in our odd little demographic than we thought.

Is the band huge Simpsons fans?
I grew up with the show. I watched it a ton for our new record. I sat down and over a course of a month I watched the first 10 seasons of the show. And different members of the band have varying levels of the show, but everybody is well acquainted with it. We’re all definitely fans of the show.

Are all your songs direct Flanders quotes or parts of Simpsons episodes?
Our first record is pretty much about 80 percent of the songs were direct Ned Flanders quotes. We had songs like “Nothing at All” and “You’re a Jerk.” It was either something that was goofy and friendly that would sound funny if screamed, or something taken out of context that would be very dark. The newest record is about 90 percent Ned quotes, and the rest are all quotes from other characters within the same conversation just to expand the lyrics a little bit.

Talk about the “Reneducation” video.
We did the music video for it, and it’s up to about 200,000 views. We’re still kind of DIY, and that was something where we bought a bunch of school desks off of Craigslist, got friends of ours to appear in the video, and got a friend of ours to film it. And yet to have that many people coming up to say they really dug the song and the single that we put out has been cool, and we’re excited about how the response has been.

Do you think you’ll easily be able to keep creating new material based off the Simpsons’ 30 seasons?
I watched 10 seasons of the show and ended up writing about 20 songs, but only 11 of them made the record. So, we almost have another record worth of songs, plus there’s another 20 seasons of shows. I guess it depends on how far we want to take it to get a couple more albums out of it.

Do you feel that some people might think you’re just a joke band and not actually give the music a chance?
Oh definitely, there’s a few people out there that write it off, which is totally understandable. You can see goofy bands that have a bit, and people think it’s all about the bit. But at the same time, we’ve had a couple of fans who our songs get put on their Spotify Discover, and they just get the music thrown at them and it sparks their interest. Then they follow up on it and find out that it’s a Ned Flanders band. There’s a bit of both of it. There’s those that see the bit going on and say, “Nah,” then there’s some people who’ll just listen to the music and find it interesting.

Do you think the band is on the right path?
Definitely. We’re trying some new stuff on this album. This one was recorded with a different core of members, so it’ll be cool having those members out playing these new songs live. I like the direction the record is going, and I’m excited to see what the response is once we’re up on stage.

TIMES OF GRACE: Out of the Darkness

CELTIC FROST: Danse of the Dead

ALESTORM: The Virtues of Piracy