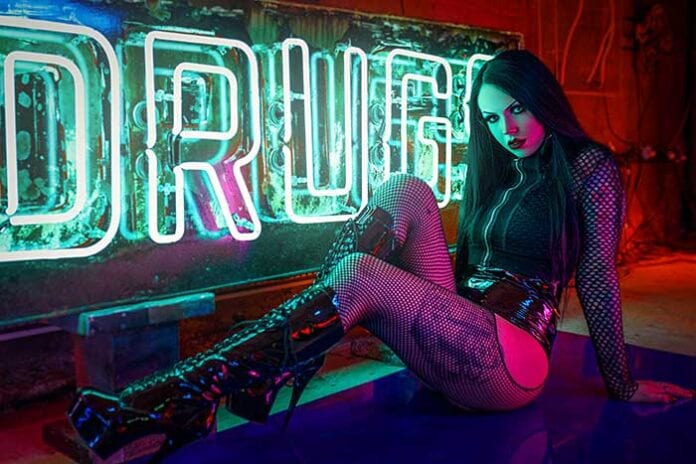 Four years in the making, Living Dead Girl’s founder/vocalist Molly Rennick’s long journey has taken many twists and turns to get to this point in her music career. After recording and scrapping two prior EPs, Rennick wasn’t satisfied until hooking up with critically acclaimed producer Mitchell Marlow (Papa Roach, In This Moment, All That Remains). Rennick made the trek to LA from Ontario in September of 2019 and camped out for six months while recording in Marlow’s home studio. Then COVID-19 shut the whole world down, which delayed the album release.

“I started recording four years ago with a local producer,” Rennick explains during a recent phone interview. “At that point, I didn’t know what I wanted. I hadn’t discovered my sound as an artist yet. That’s why those years were so important before I met Mitch. I worked with two different producers and made two different EPs that I never released. So, those years were so crucial now as I look back because of getting the experience of recording in a studio, learning how to work one on one with a producer, learning what my own vocal range was, and learning what I wanted to do with it.”

This was an important part of the process for Rennick. By the time she went to work with Marlow, she already had some valuable studio experience under her belt.

“If I had just gone straight to Mitch, I wouldn’t have known what I wanted yet,” she admits. “I had to cross a lot of things off the list. There was a lot of trial and error. At first I wanted my music to be pure, heavy screamo, then I realized I actually didn’t have fun performing this music. I wanted more singing and to play with my voice more. It was a four year process, but it was so important that I took my time with it and that allowed us to get it right when I worked with Mitch.”

The 11 modern metal anthems jump right out of the listener’s speakers. According to Rennick, the writing and recording process for Exorcism between her and Marlow was a collaborative effort.

“The last few songs that we did go to Mitch, we already had demos of, rough recordings,” Rennick says. “So, we went to him with certain riffs and lyrics. There were a few songs that we didn’t want to salvage because we knew what those songs needed was Mitch’s spin on them. There were these songs that we had ideas for that we weren’t quite sure how we were going to pull off. Then there were songs that we had halfway done that we knew would be finished once Mitch worked with it. We just knew that Mitch’s touch was what some of our songs needed. I would tell him the key points of something, and he would just connect the dots in my mind from there. He would come up with a riff to fit what I would describe for each song. It was very collaborative between Mitch and myself. Every time I pictured something, Mitch brought it to life.”

“IT IS A COOL METAPHOR FOR LETTING YOUR EVIL OUT, WHETHER THAT’S SELF-EXPRESSION IN MUSIC OR IN A RELATIONSHIP.”

The album’s first single, “Alive,” recently hit the 20,000 view mark on YouTube during a two week span, which is no easy feat. This alerted Rennick that there were quite a few people willing to give up their time to watch an unknown, independent band. “I was honestly blown away by that, because 20,000 views is a lot,” she says. “And with YouTube, the way they count views is if viewers only watch a few seconds, their views aren’t counted. So, 20,000 people actually watched this from start to finish. I was amazed that we were able to reach that many people, because it’s our first official music video and we’re a brand new band. Twenty-thousand people gave up three minutes of their life to check us out, so I find that pretty cool.”

The theme and concept behind the album title and cover art stemmed from Rennick’s obsession with horror movies and creepy, dark things. “I’ve always been obsessed with darker elements in everything in art and music,” she says. “It was a concept I came up with from watching movies like The Exorcist, paranormal movies and stuff. I was thinking of it as a metaphor, like when the priests come and are trying to get the demon out of your body. They’re trying to exorcise all the evil out of you. “Excorcism” itself is like a love song. It is a cool metaphor for letting your evil out, whether that’s self-expression in music or in a relationship. Once I came up with the idea, it just connected all the pieces together.”

“I LIKE TO BE HANDS-ON WITH ABSOLUTELY EVERYTHING. I LOVE BEING IN CHARGE OF MY OWN MUSIC.”

During the global pandemic of 2020 and the uncertainty of touring, most labels weren’t taking on new artists. Although Rennick initially shopped the album around to labels, she is independently releasing Excorcism, funded completely by the band.

“I thought we’d just wait till this pandemic passes because I was really adamant about releasing it on a label, as I thought that’s what would be best,” Rennick says. “But I spoke with a few different friends that I have in the industry and did research on my own, and I realized that self-releasing actually has some of its own benefits. Admittedly, I’m a bit of a control freak and prefer doing everything that I can myself. I like to be hands-on with absolutely everything. I love being in charge of my own music. I ordered all the CDs, all the merchandise. I renovated an entire room in my house to be a stock room where I have an entire area where I pack and ship everything entirely myself. And I’m honestly loving that I went with this route.”

Once the world opens back up to start hosting shows again, Rennick, guitarist John Ellis, bassist Jordan Storring, and drummer Ryan Claxton will be looking to play live shows, as pre-COVID allowed the band to play only a handful of local shows around Ontario.

“Now in Ontario we’re in a full lockdown, and I don’t think live music will resume anytime in the next few years,” Rennick laments. “We are seeing all our friends in America—in Florida and Texas—are going to concerts! If we didn’t live in Canada, we’d actually be playing shows right now. So, we actually have been planning on moving to the States permanently. We are having a virtual release party on Facebook live streaming—it’s free to tune in. We will be answering questions, we’ll be chatting about the creation of the album, and we’ll be doing a bunch of giveaways during it. And we are planning a livestream concert finally this summer.”

HJELVIK: From Start to Finish