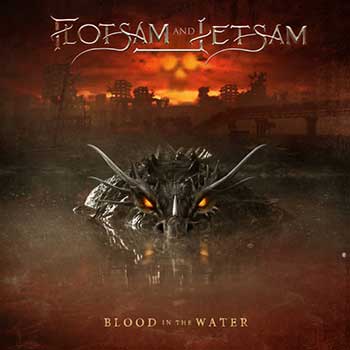 FLOTSAM AND JETSAM
Blood in the Water

SPEED/THRASH METAL: Legendary Phoenix thrashers Flotsam and Jetsam have aged rather well. Riding out the better part of their later era career has produced some of their best material, including the fantastic 2019 The End of Chaos. On its 15th full-length release, Blood in the Water, the quintet—featuring Eric “AK” Knutson (vocals), Steve Conley (guitar), Michael Gilbert (guitar), Bill Bodily (bass), and Ken K Mary (drums)—shows no signs of slowing down. On its 12 blistering tracks, the band runs through its trademark sound, consisting of many melodic hooks, memorable riffs, and catchy, chantable choruses.

The title track kicks off the album and lets the listener know right off the bat that these Phoenix boys aren’t messing around. Laden with the band’s classic and epic musical buildup, the pounding tom fills and fiery guitar harmonies build with anticipation before exploding into a ravaging and rumbling barrage of riffs, pummeling rhythms, and those fantastic vocals of “AK,” which are as strong as ever. The thrashy, old school Flotsam and Jetsam swagger of “Burn the Sky” pairs well with the memorable “Brace for Impact,” which immediately has the listener hooked from its mid-paced chugging to the catchy chorus and all the way up till the climactic conclusion.

From there, it only gets better, as there are plenty of standout tracks. The raging “Too Many Lives,” the dramatic “A Place to Die,” and the aggressive “Reaggression” fit right in with the rest of the tracks. “A Place to Die” possesses more thrashy goodness, while “Cry for the Dead” harkens back to the classic Flotsam sound from Doomsday for the Deceiver. “The Walls” contains pounding double kick patterns, soaring guitar melodies, a slow burning, Maiden-esque gallop with a catchy hook, while album closer “Seven Seconds ‘Til the End of the World” contains progressive elements that includes an orchestral breakdown, a first in Flotsam’s musical arsenal.

Flotsam and Jetsam keeps getting better and better with each passing year, and Blood in the Water is a true testament to the band’s endurance and perseverance. The amount of quality tracks on this record hold up to anything they’ve created in the past, and then some. ~ Kelley Simms