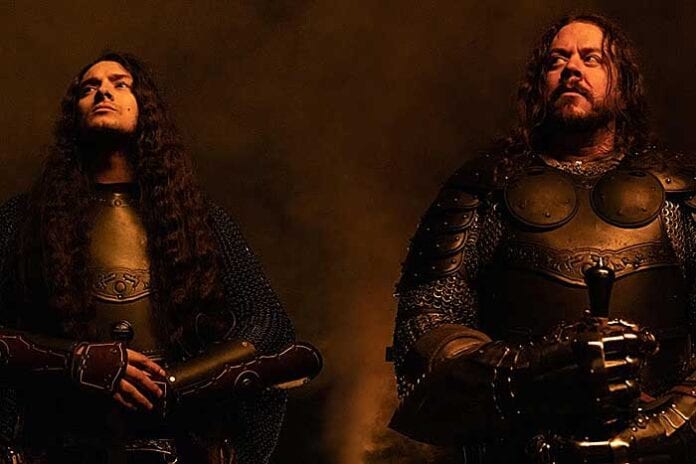 “In no particular order, we compiled a list of 10 Black Metal Riffs that we would consider essential for our new friends at Outburn.”

Jason: The opening of this song, if you ask me, encompasses the sound of second wave of black metal in the first 30 seconds perfectly. It’s got that iconic two chord black metal progression followed by pounding drums and a memorable yet sinister lead that has been ripped off more than once by everyone.

Jesse: The way the drums and lead begin at the same time just pumps me up. The lead guitar line really tells a story that makes me want to delve deeper into the lore of the song’s lyrics.

Jason: The way this verse riff kicks in with such authority is something every metaller should be able to appreciate. The lyrical prose and vocal patterns followed by that 6/8 pounder of a riff is enough to make you want to fight someone.

Jesse: “The galloping groove of this riff is a complete banger in every way. The vocals match it perfectly and the chuggy tails make my speakers bleed! I always crank up this riff and make everyone around listen.

Jason: We had to pick this riff for a couple different reasons. One, there is no shortage of Steinmeyer riffs that we could’ve picked, but this riff paired with Legion’s story of Vlad Tepes is nothing to be looked over. The riff is as punishing as any black metal riff can get. It’s got the imperial tonality and leads back into the intro seamlessly.

Jesse: The point in the song at which the riff arrives is a quintessential factor, and this riff lands at the song’s most powerful moment, then it does a key change. The lyrics on top describe just how bad of a dude ol’ Vlad Tepes Dracula was. Cold grimness at it’s best.

Jesse: Ending the song on an adventurous note, this riff seems to act like an epilogue to this already epic song. It’s simple and effective, and offers a few interesting twists and turns. It never fails to grab me. I always wish the lead at the end went on longer!

Jason: No black metal list of ours will ever be complete without an honorable mention to the mighty DAWN. Fredrick Soderberg’s phrasing on this bridge is quintessential black metal songwriting. The way the bridge builds and evolves into its own movement is something that hooked me instantly.

Jesse: This riff has to be one of the coldest riffs ever composed. It’s a blasting buzz saw attack that has a cool progression, which works well to kick off the bridge section of the song, leading into a ripping verse/lead combo right after.

Jason: Dark Funeral is another band that truly understands the concepts of buzz saw attack. The way this chorus kicks into the halftime buzz saw with Caligula’s otherworldly voice coming in halfway through is a perfect example of this style executed properly.

Jesse: Pure evil, that’s what this riff is. The mid tempo drums really stand out in a powerful way, creating a whirlwind of kicks once the second part arrives. I love the vocal snarls and the cold accompanying buzz saw.

7. DIABOLICAL MASQUERADE
“Astray Within the Coffinwood Mill” (0:45-1:38)
The Phantom Lodge

Jason: First and foremost, we are quite the fans of almost everything Dan Swano. This riff alone though is textbook black ‘n’ roll. From the way it comes out of the big atmospheric intro, following a black ‘n’ roll riff from hell, accompanied by Blackheim’s perfect lyrical execution and prose to boot is something that I hold in high regard. Not to mention those timpanies.

Jesse: Diabolical is always good for the quality black ‘n’ roll riffs, and this one shines brightly (or, darkly?). Dan’s timpani sounds bring some extra boom, and the cyclical nature of the groove is catchy as hell. Tough to pick one riff from Diabolical Masquerade. I feel we have chosen…wisely.

Jason: Summoning is a very large inspiration to the atmospheres that we look to achieve. The march behind this song, and riff specifically, is melodic perfection. The staccato melody backed by the massive horns and war-like drums, with Silenius and Protector’s vocal arrangements is not something to be undermined by any means.

Jesse: It reminds me of a fanfare of sorts, like an announcement of someone important arriving or departing. I’ve always felt this was an extremely unique riff with such a cool arrangement. It speaks of legends foretold and untold, with Summoning’s characteristic drums pounding away the time in a proud, militant fashion.

Jason: I had to go with an entire section of this song to really get across why I love it so much. The way it opens up with the tolling of the bells and kicks into, what I consider the truest and most original of black ‘n’ roll sounds, followed by Quorthon’s sinister description of being led by a force across the bridge into hell is something that truly paints a terrifying and grim picture in one’s head.

Jesse: The influence of Bathory on legions of headbanging groups of metalheads cannot be understated, and this selection embodies that blood soaked and fire crisped rage. A nice intro to get revved up, then smash into perhaps the hive mother of all black ‘n’ roll riffs. Besides, who doesn’t love a good song about eternal fire? (wink)

Jason: Valfar could really do no wrong, let’s be real here. This song in general is an opus to one’s life, and I feel the main riff embodies the term “adventure” in its purest form. It’s a blistering cold riff (no pun intended, sorry Valfar) that captures the atmosphere of the lyrics perfectly. Plus, the synthwave outro was about 15 years ahead of everyone else.

Jesse: I was able to catch Windir at Milwaukee Metalfest in 2003. My friend Derek Engemann and I were lucky enough to return to the venue right before they played (and some passersby offered us some mushroom caps!?). Let’s just say it was an enlightening experience. I was so incredibly spellbound by this band’s music that I went and purchased everything they had shortly thereafter. This particular riff has always exemplified their take on the spirit of black metal and how beautiful it can be.

“We chose this list fairly deliberately, but in all honesty we could sit here all day discussing our favorite  riffs. Narrowing down the riffs was hard enough, and we have a few more honorable mentions added below. We highly encourage all who check this list out to go deep though, as these albums are far more than just riffs. Go deep, people. It’s worth it.”

IMMORTAL
“Far Beyond the North Waves” (5:18-out)
Sons of Northern Darkness

MOMS THAT ROCK: An Interview with Sandy Hittesdorf, Mother of Ash...