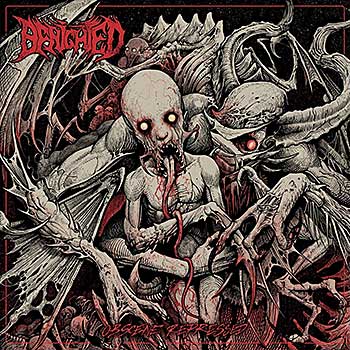 BRUTAL DEATH METAL/DEATHGRIND: Benighted is back in a big way with their latest release Obscene Repressed. The new record is a concept album that tells a twisted tale of a young man with a deformity, who feeds a part of himself to his unwitting mother in an attempt to bring himself closer to her (in a carnal way). With a story that feels like a contemporary horror flick, yet seems like it could’ve been pulled from the annals of classical mythology (think Atreus and Thyestes crossed with the Oedipus trilogy), Benighted pulls no punches when it comes to upping the gore level on this one. Luckily, if that sort of thing isn’t your cup of tea, the album is musically exhilarating. The drums and guitar riffage are absolutely unrelenting, and frontman Julien Truchan is incredibly versatile in his vocal delivery—especially early on during “Nails,” which sees Truchan alternating between low throaty growls to brutal pig squeals.

Having been at this since 1998, the group certainly has nothing to prove. They are the heaviest French act and have already cemented their spot in the brutal death metal genre, among such contemporaries as Cannibal Corpse, Dying Fetus, and Aborted. However, it’s nice to see a band that has been at it this long that can still put out an album that is sonically interesting. For proof, look no further than the track “Muzzle,” which begins as a super-fast grindcore song, but breaks into an airy, jazzy interlude close to a minute and a half in that feels completely right, and then back into absolutely evil brutality. At the same time, the album has plenty of just straight grindcore tracks, like “Casual Piece of Meat” and “Undivided Dismemberment,” that will satisfy even the elitist fans.

The tradition of Benighted tapping guest vocalists has continued on this record, with the most notable guest spot going to Hatebreed’s Jamey Jasta, whose instantly recognizable voice sounds out over tribal drums at the start of “Implore the Negative.” Jasta manages to bring a hardcore feel to deathgrind—something that sounds like it would be weird, but in actuality, completely rips. This one is sure to be a blast live—just listening to it play out, you can picture the push pits going apeshit. Another guest spot sees Sebastian “Grimo” Grihm of the band Cytotoxin lending his talents to one of the heaviest tracks on the album, “The Starving Beast.” The combination of Grimo and Truchan gives a downright demonic feel to track.

The album’s story arc ends with the dark and brooding track “Bound to Facial Plague,” which brings a satisfyingly heavy conclusion to the record. Benighted has also included two bonus tracks on the final version of the record, which while not available to review, include a cover of Slipknot’s “Get This” that is sure to be incredible. On Obscene Repressed, Benighted shows there is still room for brutal death metal to grow, taking the genre to new heights in macabre brutality. ~ Nathan Katsiaficas

PVRIS: All We Know of Heaven, All We Need of Hell