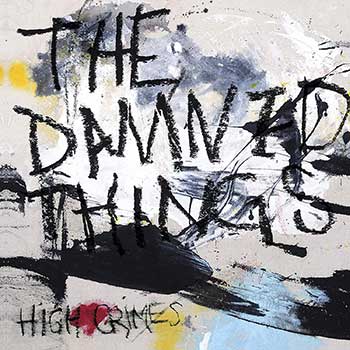 POWERGROUP METAL: It’s been roughly eight and a half years since The Damned Things released Ironiclast, its debut record, so it would be fair to expect the band has evolved since then. Featuring members of Every Time I Die (Keith Buckley), Fall Out Boy (Joe Trohman, Andy Hurley), Alkaline Trio (Dan Andriano), and Anthrax (Scott Ian), the band’s sophomore collection is a bit different from its predecessor, and it’s hard to say if the changes have been for the better. With Ironiclast, the band was fueled by a strong line of melody that vibrated wonderfully throughout the record. High Crimes, on the other hand, barely utilizes the band’s melodic strengths. Instead, the sound has more of a 70s and 80s metal vibe, something one could have anticipated from Ian’s major influence on the songwriting.

Frankly, High Crimes is more of what was expected the first time around, and The Damned Things seemed to have done things in reverse. Ironiclast was more varied and larger in sound, whereas High Crimes feels more straight-forward and aggressive. Tracks like “Cells” and “Something Good” are the most reminiscent of the band’s beginning—striking and memorable—while “Carry a Brick” and “Young Hearts” bring to mind White Zombie and Twisted Sister, which is a good thing. However, much of what remains tends to dip at times. For example, “Storm Charmer” goes on for too long, and “The Fire Is Good” feels surprisingly empty and short-lived for a closing number. Nevertheless, it’s good to hear The Damned Things back in action. High Crimes may not be as exciting as Ironiclast, but it’s still a damned solid collection from a group of talented musicians. ~ Nathaniel Lay