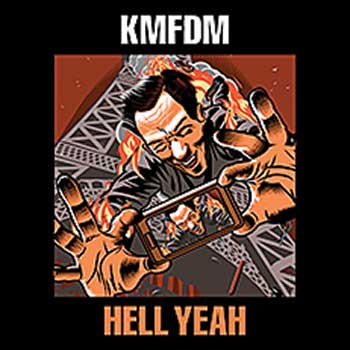 ELECTRO INDUSTRIAL ROCK: After a three year break, KMFDM returns with another dose of its patented brand of electro industrial rock. Anyone hoping for a radical change or progression with album number 20 will be disappointed, as Hell Yeah follows the same formula the band perfected back in 2003 on WWIII. Angry, pounding tracks like “Burning Brain” and “Glam Glitz Guts and Gore” balance out the more melodic and atmospheric “Only Lovers” and “Shock.” There is a positive vibe on the two most accessible and danceable tracks, “Hell Yeah” and the anthemic “Freak Flag,” while the darker, dystopian world of 2017 is reflected in “Total State Machine” and the inevitable “Fake News.” While the metallic guitars still cut through the mix with precision, the production on Hell Yeah gives a nice emphasis on the beat, and many of the songs should kill in the clubs. There is also a return of the band’s early reggae influences on a couple tracks and plenty of funky bass throughout. Sascha and Lucia both deliver vocals that range from sensual to scary, often in the same song. The overall sound is very much what one would expect from KMFDM, but Hell Yeah has consistently stronger material than the last couple of records and demonstrates the band is as vital and driven as ever. ~ Daniel Hinds