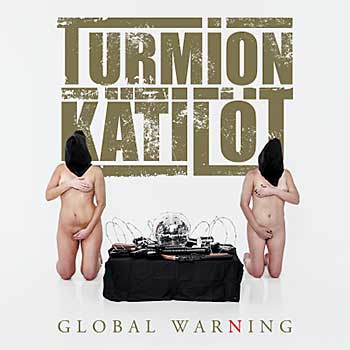 EXTREME DISCO METAL FROM FINLAND: Here’s something to check off your quarantine listening bucket list—Finnish industrial metal. Before you ask, yes, such a thing does really exist, and, yes, it’s truly fucking amazing. So, instead of scrolling your Facebook feed for the millionth time or binge watching another Netflix show, expand your horizons with a sound you have more than likely never heard before—Turmion Kätilöt (which roughly translates to Midwives of Doom) and their Nuclear Blast debut Global Warning. While this is their major label debut, these dudes have been doing this for a while—this is their 10th proper full length.

Just as the album title says, you need to be warned going into this. All the vocals are in Finnish, so there’s that. It isn’t really that big of a deal, because we all love Rammstein, right? And those vocals are in German. Speaking of Rammstein, Turmion Kätilöt emulates the unconventional sound of their German contemporaries quite a bit—powerful, pulsating waves of synth and deep Euro dance/trance grooves (“Naitu,” “Kuoleman Juuret,” “Syvissa Vesissa”), mixed with heavy industrial metal laced with larger than life hooks (“Kyntovuohi,” “Sylkekaa Siihen,” “Turvasana”). Album highlight “Viha Ja Rakkaus” is as close to a ballad as Global Warning gets, a soaring track backed by atmospheric synth work and some of the album’s best melodies. And if you’re really in the mood for weird, stay tuned until Global Warning’s final track “Mosquito A La Carte (To Be Continued 5),” which can only be described as part mariachi, part noise therapy. You’ll understand when it hits your speakers.

The trouble with Global Warning is that it just flat out overstays it welcome. Sure, it’s cool to a point, but at nearly an hour in length, the bloom comes off the rose before the end, as these songs get a bit tiring and redundant. Still, this is quite the record to behold, one that really needs to be experienced more so than simply read about. It’s, uh, different, to say the very least. ~ Brian Campbell