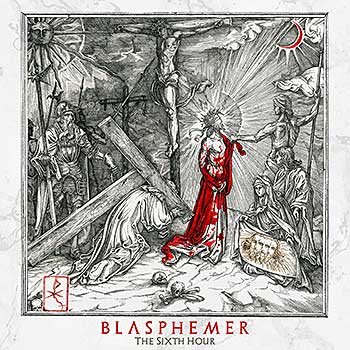 An evil presence makes itself known on opening track, “Let Him Be Crucified,” decorated with mid paced tremolo riffs, pounding blastbeats, and viciously growled vocals. The anthemic “Hail King of the Jews!” will make you gleefully chant the catchy chorus, while “The Stumbling Block” continues the galloping evil atmosphere.

The fantastic acoustic instrumental, “Blessed Are the Wombs That Never Bore,” couldn’t have come at a better time, creating a haunting melodic atmosphere between the brutality of its predecessor “Stabat Mater” before heading back into the furious pace of “Lord of Lies.” The other instrumental, “Via Dolorosa,”—sandwiched in between “Lord of Lies” and “The Robe of Mockery”—also serves as a dynamic interlude. Closer “De Profundis” ends on a high note with the same evil, slow grinding riff that starts the album—along with a spoken word gospel segment—and fades the track out. Although the production of the album is a little thin sounding, it fits perfectly with the band’s black metal presence.

Even though the overall concept of the album can easily be followed for the 42 minute duration, the songs can stand on their own. With The Sixth Hour, Blasphemer has created a praiseworthy album that should gain a band that’s been around since 1998 some well deserved recognition. ~ Kelley Simms