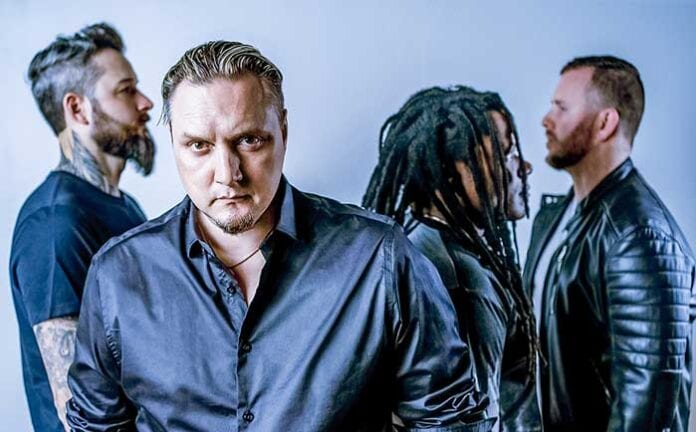 WATCH THE EXCLUSIVE VIDEO PREMIERE OF STEALING EDEN’S “EDGE OF THE WORLD” ON OUTBURN.COM

Without missing a step, the Vancouver crew have picked up where they left off—a bold and resonating new track re-emblazoning Stealing Eden’s sound for existing fans and new suitors alike.

“‘Edge of The World’ sonically and lyrically sums up what we went through to make it out the other side of the creative process. Standing at the edge of your life, looking in trying to find meaning.” – David Ottoson

When Stealing Eden released their debut album Truth in Tragedy in 2011, the West Coast outfit didn’t anticipate the turbulence that was to follow. Within months of the LP’s release, the band’s relationship with their record label had soured and internal conflicts flared. By the end of their first tour, the lineup had dismantled and the future looked bleak. But nearly a decade after experiencing woes that almost led to their demise, original members David Ottoson (vocals), Maximus Whyman (guitars), and Monty Lang (drums) re-ignited the embers of Stealing Eden, who make their highly anticipated return in 2020, after nearly a decade.

Whilst the band themselves stepped away from music, little did they know that their loyal band of fans were hard at work, posting their music all over YouTube, racking up millions of views on on the video channel, with the album itself racking up north of 5 million streams on Spotify to date.

Originally formed in 2008, Stealing Eden was born out of the ashes of metal bands Noise Therapy and Among The Betrayed, touring with the likes of Mötley Crüe, Incubus, Marilyn Manson, and Kid Rock between them.

When both bands dissolved, the vision was to create a new project that fused catchy vocals with the melodic elements of metal and hardcore, thus giving birth to Stealing Eden and Truth in Tragedy. Fast forward to present day, having been joined by bassist Chris Campbell, the reincarnated Stealing Eden is more robust than ever. Drawing upon a wealth of personal experiences as well as a diverse and multi-faceted array of influences, Stealing Eden’s new single “Edge of The World” nods to iconic acts such as Faith No More, Sevendust, and Shinedown.

“I want people to get what they need from it, whether it’s good times or bad. I want to connect with listeners on a greater level and be there when they need an escape or to help them move on.” – Maximus Whyman