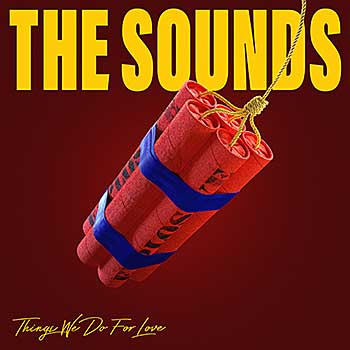 THE SOUNDS
Things We Do For Love

SAILING THE SEAS OF SMOOTH: It’s been seven long years since The Sounds from Sweden last graced us with an album of their infectious and memorable brand of power pop, and truth be told, this album really hits the spot.

Sure, The Sounds in 2020 are sonically less snotty and brash than they were on their Living in America debut or their breakthrough sophomore effort, Dying to Say This to You, but that’s certainly not a bad thing. There’s something to be said for maturity and hindsight, and that’s where Things We Do For Love fits into the band’s oeuvre. The combination of synth and guitars is something The Sounds always did well, but this collection of songs does so in a manner that’s less Blondie and more Depeche Mode, with the pop sentiment of their songwriting shooting for moodier melodies, as opposed to big, major key choruses.

That’s not to say that Things We Do For Love isn’t amazingly catchy, because, well, that’s what Swedish songwriters do best, right? From ABBA and The Cardigans right down to In Flames and Opeth, this country’s musicians know what they’re doing when it comes to nailing melodies that pull at the heartstrings. Frontwoman Maja Ivarsson possesses a powerful charisma that leads the charge, sounding confident on songs like “Hollow,” “Safe and Sound,” and the title track, in a way that’s definitely progressed since the band’s early days.

That’s because Things We Do For Love embraces the band’s bratty past and Maja’s sex pot appeal, while at the same time hammering home that aforementioned feeling of maturity and worldliness that defines The Sounds now. This is a band with open eyes and ears, writing pop music with enough smarts to stick around for the long haul. ~ George Pacheco

HOT WATER MUSIC: Light It Up