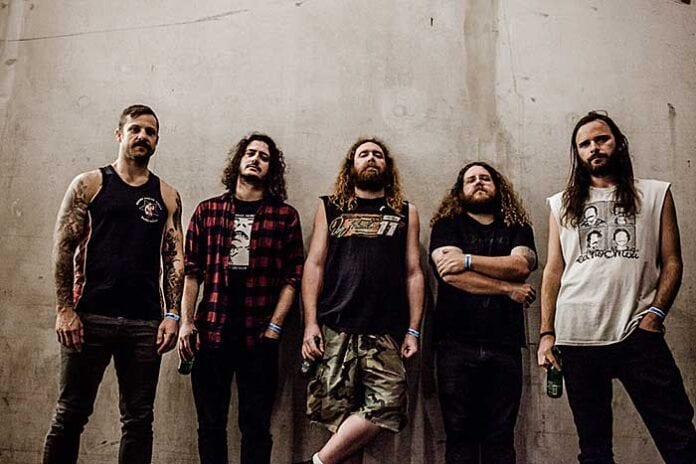 Richmond’s Inter Arma, reigning masters of the slow build, celebrate their past on Garbers Days Revisited, their new covers record, recorded in between tours in support of their critically acclaimed 2019 full length Sulphur English.

Garbers Days Revisited, named after the band’s former practice space, was once again tracked at Dark Art Audio in Madison, TN. Inter Arma show off their wide array of influences, tackling covers by Nine Inch Nails, Prince, Cro-Mags, and more. Garbers Days Revisited sees Inter Arma redefining the very aspects of the music that inspired and influenced them from their very beginnings.

The band comments: “Hi. We released our cover of Nine Inch Nails’ ‘March of the Pigs’ this past Tuesday, but felt it would have been inappropriate to latch onto the outrage we’re all experiencing to promote a cover album, even if by happenstance. If you want to hear it, it’s out there. In the meantime, we suggest that you continue to fight against police brutality and institutionalized racism however you can. It’s working. If you’ve got the means, please consider giving a few or a lot of dollars to the Richmond Community Bail Fund and/or BEAM (Black Emotional And Mental Health). Links below. Black Lives Matter. Thanks.”

Inter Arma’s inspiration can indeed be felt throughout the 8 tracks therein; from the melancholic, spoken intro leading to the explosive, riff heavy take on the Neil Young classic “Southern Man”, to the nearly pitch-black metallic approach of Hüsker Dü’s ”The Girl Who Lives On Heaven Hill”, every song on Garbers Days Revisited captures the sounds that make Inter Arma one of heavy music’s most unique and creative bands.

Garbers Days Revisited is due out July 10th on CD/LP/Digital formats. Physical packages are available for pre-order via Relapse.com. Digital Downloads/Streaming Services are available here.

BLEED FROM WITHIN Releases New Live Song and Video for “Into...