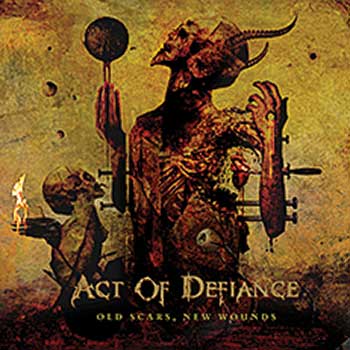 METAL METAL: The second salvo from Act of Defiance—featuring ex-Megadeth guitarist Chris Broderick and drummer Shawn Drover, Shadows Fall bassist Matt Bachand, and vocalist Henry Derek—solidly backs up the damage done with 2015’s Birth and the Burial. While comprised of 11 armor-plated songs of pure metal, it’s a more diverse affair than its predecessor without diminishing the sheer blunt force trauma entailed in the unleashing of every track. When it comes to chunky, machine gun salvos of chuggery, the likes of “M.I.A.,” which opens the album in fierce style, and “Circle of Ashes” deliver mightily, while thrashers will find plenty to sink their teeth into littered across the record. With a slightly more progressive air insinuating its way into proceedings here and there, every track has several dimensions to it, and though they might not manage to be unpredictable, there is a freshness to what they do and a compelling urgency driving the whole thing. Best here are probably the suitably ruthless strains of “Another Killing Spree,” which sounds built to dispatch those that might get in the way with dismissive casualness, and the titanic, unstoppable brute that is “Broken Dialect,” which again is quite proggy though heavier than hell. Long live the metal, wounds and all. ~ Dan Slessor