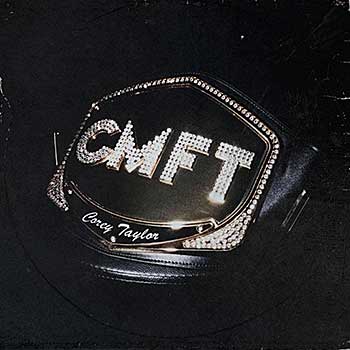 COUNTRY PUNK POP METAL ROCK RAP: Corey Taylor has been talking about a solo album ever since 2009, and now it’s finally here! CMFT is an eclectic mix of Taylor’s various influences, everything from country to punk and even some rap, and some song ideas date back to when he was in high school. This musical diversity will either be welcomed or loathed by his fans. Either way, no two songs sound the same, and this album truly shows Taylor’s musical range.

Starting with “HWY 666,” this song was already released as a lyric video and it’s a seriously unique track. It’s the perfect blend of country and heavy metal, as odd as that is to say. The guitar parts played are very metal but with an acoustic country tone, as Taylor sings Johnny Cash inspired vocal lines. With the lyrical themes mixed in with the rock/country sound, this song is reminiscent of “The Devil Went Down to Georgia.”

“Black Eyes Blue” slows things down and has a pop Stone Sour vibe. It’s a fairly straightforward song with a catchy chorus and good lyrics, but it’s not one of the album’s standout songs. “Meine Lux” is a very catchy rock anthem with some seriously shredding guitars, and with the addictive chorus (“meine-meine-meine-meine-meine-meine-meine-lux/woah-oh-oh-oh-oh”), this song will get stuck in your head all day. When performed live, the crowd will be singing and dancing to this song.

Skipping down to “Silverfish,” so far, we’ve heard a variety of songs, especially catchy rock anthems, but this track really stands out. The song starts off largely acoustic, and you can hear the passion Taylor put into the singing and songwriting. As the song progresses, it gets louder with the addition of drums and a second guitar. It’s a simple song, but will most likely be a fan favorite.

“Everybody Dies on My Birthday” is an engrossing radio friendly rock song that’s a bit heavier than some of the other tracks on the album and the solo is especially awesome. Christian Martucci (Stone Sour, Black Star Riders) and Zach Throne (Stone Sour, Bruce Kulick, Pearl Aday) are on guitars, and it’s no surprise that Taylor chose Stone Sour members to work on his solo album because the result is well done.

Fans have most likely already heard “CMFT Must Be Stopped,” the rock rap hybrid that features Tech N9ne and Kid Bookie. We hear Corey Taylor’s rapping skills, which are actually pretty impressive, making him one of the most versatile vocalists in metal—he can growl, sing, and rap. It’s surprising that Taylor chose this song as one of his singles. “CMFT Must Be Stopped” is the only rap song on the album and it is way more upbeat than the rock radio vibes of the rest of the album.

The last song is by far the best on the album—“European Tour Bus Bathroom Song.” Taylor suddenly shifts into punk, writing by far the fastest song on the album. At only two minutes, it will certainly leave a lasting impression on listeners. It would have been nice if there were more songs like this on the album, but it seems like Taylor specifically wanted a diverse album.

CMFT will definitely come as a surprise to listeners and fans of Corey Taylor’s previous music. Some may appreciate the diversity and Corey’s varying influences, while others will probably opt for Slipknot albums. Either way, much respect must be given to Corey Taylor for making a solo album that defies all expectations. ~ Stephanie Jensen