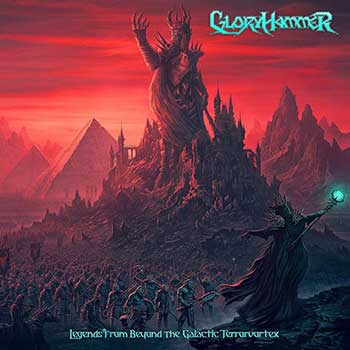 GLORYHAMMER
Legends from Beyond the Galactic Terrorvortex

OVER-THE-TOP POWER METAL: If you took the already poncy, flowery, and overblown world of power metal and exponentially expanded upon its cheesiness, you’d have Gloryhammer. The brainchild of Alestorm’s Christopher Bowes—who given his day job, obviously already has a Ph.D. in musical cheese—Gloryhammer is Bowes’ personality essentially stripped of triplet/waltz rhythms. It’s the overblown spot in which he adheres closer to the majestic linearity of orchestral power metal like Rhapsody of Fire, Luca Turilli, Stratovarius, and Power Quest, and spews opulence dressed up in Guardians of the Galaxy-like superhero costumes instead of frilly shirts and lace-up leather crotch huggers.

At the band’s darkest moments, there are wisps of latter day Bal-Sagoth’s anthemic triumph. More often than not, it’s extravagant over-the-top references to the chintziest of hair flipping power metal that makes DragonForce sound like a crust punk band in comparison. There’s even a spot where they symphonically build upon an Alestorm friendly two-step while singing about fighting for power and glory in “Hootsforce.” Songs tackle the important topics of the day: “Masters of the Galaxy,” “The Land of Unicorns,” “Legendary Enchanted Jetpack,” and the five part denouement “The Fires of Ancient Cosmic Destiny.” Obviously, their tongues are planted firmly in their cheeks when it comes to themes and topics, as many mentions are made of battles, freedom, distant lands, warriors doing warrior things, and blah, blah, blah, but there is an unflappable adeptness at recycling powerful power metal tropes. This is for that segment of fan who wants their metal delivered with a side of fist pumping while frothy flagons of mead are held aloft as songs of fictional battles that will never be fought are sung. ~ Kevin Stewart-Panko