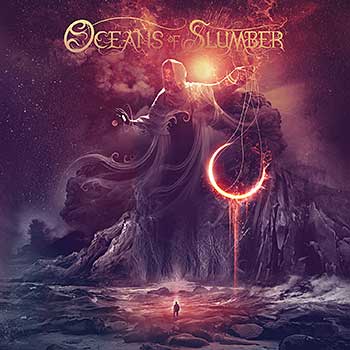 QUALITY SYMPHONIC DOOM METAL: After hearing the operatic metal tones of Oceans of Slumber, it may be hard to believe that they hail from Texas and not some obscure, hard to pronounce town in Sweden. Led by vocal powerhouse Cammie Gilbert, the doom metal group delivers a thoroughly exhaustive performance on their eponymous new full-length, an album that clocks in at a dizzying 77 minutes.

The opening “The Soundtrack to My Last Day” brings lingering notes of dread and trepidation, with crushing death growls following an acoustic refrain, all while Gilbert flexes her vocal range right off the rip. Gilbert is a force on the following “Pray for Fire,” a powerful track with synth underpinnings that once again allows this talented frontwoman to shine. Gilbert kicks it into the next gear on the sprawling “A Return to the Earth Below,” showcasing her dynamism in all its symphonic glory. The ethereal “Imperfect Divinity” is an early break in the action, which, at this point in Oceans of Slumber, is welcomed since we are nearing the 21 minute mark after only three songs.

Led by chunky, churning riffs and devastating guttural roars, “The Adorned Fathomless Creation” pulls you right back down into the murky depths, the gothic tinged “To the Sea (A Tolling of the Bells)” tempers the pace a bit with Gilbert back front and center. “I Mourn These Yellow Leaves” is a thick slab of doom with crashing walls of sound and a beautiful vocal dynamic between the soaring Gilbert and her heavier vocal counterpart. Deep into the record, the orchestral “September (Momentaria)” is four minutes of pure instrumental bliss, and “Total Failure Apparatus” is another monster that combines all the best elements of Oceans of Slumber, but, by the time you reach the closing cover of Type O Negative’s “Wolf Moon,” you’re exasperated, which is a shame, because it’s a quality take on the original. But, with a record of this length, you have to expect some listener fatigue.

Oceans of Slumber is a better than good record. Just make sure you carve out enough time to take it all in. ~ Brian Campbell