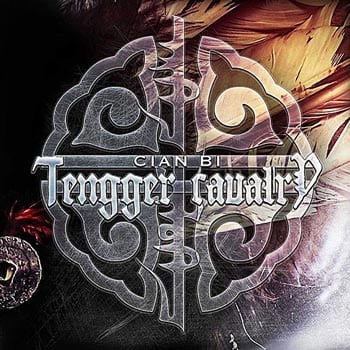 FOLKED UP METAL: The brainchild of multi-instrumentalist and vocalist Nature Ganganbaigal, Tengger Cavalry offers a surprisingly varied, variously surprising take on the always in vogue folk metal scene. Cian Bi, the band’s newest album—officially sixth, but 13th depending on your criteria—contains 15 songs with an ever-changing mix of cross-cultural sounds. Ganganbaigal’s guttural throat stinging and the ubiquitous twang of the horse head fiddle offer strong Far East counterpoints to decidedly Western (sometimes a little too chuggy or nu metal sounding) straight-faced metal. The real secret of Tengger Cavalry continues to be Ganganbaigal’s songwriting, which keeps the juxtapositions fresh and intriguing. When it mixes just right, on songs like “Cian-Bi (Fight Your Darkness)” and “A Drop of the Blood, A Leap of the Faith,” there’s nothing quite like it. When it falters or simply sounds too alien, it falls to Ganganbaigal’s clean vocals to bridge the gap between dissonant elements (and he proves time and time again that he’s more than capable of handling that task). There’s no true ballad this time around, unlike “Ashley” from 2017’s equally evocative Die on My Ride, though “Just Forgive” is a radio rock curveball that’s equally as jarring in context. Better, though, is the epic chorus of “One Tribe, Beyond Any Nation,” which more than makes up for the aforementioned anomaly. With Cian Bi, Tengger Cavalry continues to defy convention, exceed expectation, and offer truly unique music. ~ Nick DeMarino