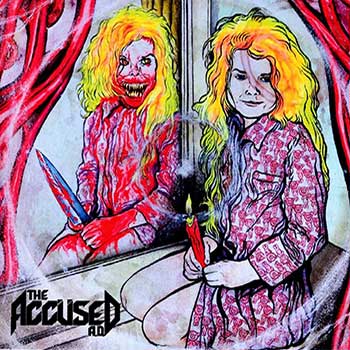 THE ACCUSED A.D.
The Ghoul in the Mirror

THE PAST AND THE PRESENT: We don’t know the backstory behind why the world now has The Accused (featuring original guitarist Tommy Niemeyer, who created and manifested the entire Martha Splatterhead character/concept) and The Accused A.D. (featuring original vocalist Blaine Cook, bassist turned guitarist Alex Sibbald, and Mickey Widmar from Poison Idea on drums). However, it’s probably fraught with unnecessary drama, broken-down relationships, shattered egos, and a bunch of he-said-she-said crap about who has the rights to the moniker. The funny thing is that all of this has followed the creation of a band its members had no idea would ever become a thing and was devised nearly 40 years ago when they were probably drunk.

Whatever’s created this fracture can’t negate the fact that Niemeyer, Cook, and Sibbald were part of a band that rewrote the rules on both sides of the hardcore punk and metal fences. The Accused from back in the day was crossover/thrash royalty, and if the precedent set by recent “A.D.” bands is any indication, who can honestly say expectations were lofty. On that note, The Accused A.D. has actually been around for a good handful of years as Toe Tag, having only recently adopted the new moniker in the spirit of stakes, claims, and obfuscation. This makes some of the amateurish paths Cook, Sibbald, Widmar, and bassist Steve McVay have taken on The Ghoul in the Mirror somewhat confounding. Cook’s voice is, understandably, devoid of the snotty, razor scraped howl associated with classics like The Return of Martha Splatterhead, More Fun than an Open Casket Funeral, and Martha Splatterhead’s Maddest Stories Ever Told. His voice lacks individual identity these days. Though, it would have been more surprising if he burst out of the gates with the same throat abuse as he did 30 plus years ago. What’s more disappointing—and was absolutely avoidable—was commencing the album with “Juego Terminadao,” which is milquetoast, midpace sludgy metal without sludgy guitar tone, while the next track, “Diabro” is a peppier, more excitingly angular piece.

It quickly becomes clear that The Accused A.D. aren’t locking themselves into neither their past sound nor any one particular direction. The next handful of songs tackle a breadth of subgenres from stoner metal (“Dirt Merchant”) and crossover thrash (“Hate Your Friends”) to something Pantera might have done during their upward trajectory (“And the Devil Walks”). And then there’s the Voivod-ish “Pick the Sores” and a loosey-goosey cover of “Rock and Roll Hootchie Coo.” Unfortunately, nothing truly stands out as head and shoulders exceptional, with the tendency of the band to not double rhythm guitars during solos and surprisingly flat production by Jack Endio has this album seem more like a cobbled together jam. Some of it is good, some is subpar, but the variety is engaging and listeners old and new will be kept on their toes as the fun the band is obviously having exudes from the speakers. ~ Kevin Stewart-Panko