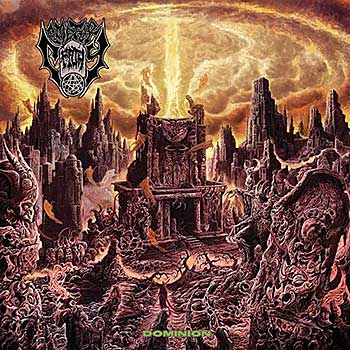 DEATH METAL: The internet, which according to the internet, never lies and is never wrong, informs us that despite calling Atlanta its home and HQ, Cemetery Filth’s members are spread out all around the southeast. And while this quartet of dudes may hail from Georgia, Alabama, Tennessee, and Florida, what one would assume in listening to their debut full-length is that the band both hailed from Tampa circa 1989-90 and just blazed in using Marty McFly’s time travelling DeLorean after a spell of nurturing during the age of intolerably hot storage locker rehearsal rooms and sweatpants boners. Note that said four-wheeled time machine would, of course, be covered in stickers from other prominent late 80s/early 90s death dealers (Morbid Angel, Malevolent Creation, Obituary, Monstrosity, Asphyx, Autopsy to name a few) and that guitarists Ryan Guinn and Matt Kilpatrick would have B.C. Rich Ironbirds slung over their shoulders and be sporting Altars of Madness back pieces in further salutation of their most obvious heroes/influence.

This isn’t to say that Cemetery Filth facelessly fall into the growing category of new bands content to play riffs from their favorite and classic old school death metal albums backwards and sideways. They may be decidedly tapping into a creaky old vein and make judicious use of a sonic quality akin to a 30-year-old basement torture dungeon, but a song like “Subduction” is livened with pulsing drum patterns, thrash metal two beats, and copious whammy bar abuse, whereas the title track and “Exhumed Visions” employ spates of sludgy tempos, majestic leads á la Necroticism era Carcass, and fetid sounding sustain in the achievement of harrowing mood and dank atmosphere.

“Paralytic Scourge” borrows from Jeff Hanneman’s tri-tone abuse vault and early Sacrifice’s chromatic pedaling and dive-bomb leads. “Festering Vacuity” takes progressive kinship alongside fellow one foot in a cave the other in the cosmos newcomers like Blood Incantation and Nucleus. It should be noted that both aforementioned tracks do their darnedest to divert attention from the fact that if it weren’t for Altars of Madness, Dominion, if not Cemetery Filth itself, wouldn’t exist. It’s impressive how Dominion has built on its inspirations, slowly moving Cemetery Filth in the direction of its own identity, and it’ll be interesting to see how the band molds those inspirations going forward. ~ Kevin Stewart-Panko