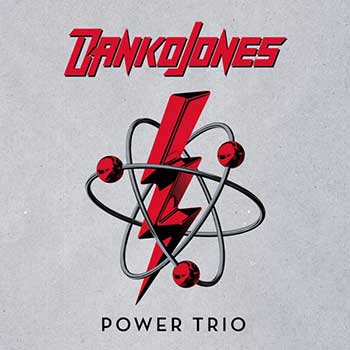 ROCK AND/OR ROLL: There are two things to consider when throwing this, the 10th(!) record by Danko Jones, on. First, the history and lineage of the power trio and all the great bands and material that has come screaming and barreling from the trident of what used to be rock’s most stripped-down formation. Second, the number and nature of popular music’s longing love songs.

As it applies to point one, naming your 10th album Power Trio is a not only a statement recognizing this particular trio’s past accomplishments, but also ongoing and future intent. Power trios have historically belied their minimalist memberships in the creation of some of music’s most memorable moments. Think Venom, Cream, Motörhead, Dinosaur Jr., ZZ Top, Nirvana, the Stray Cats, Melvins, the Young Gods, Raven, Hüsker Dü, Godflesh, Prong, Nomeansno…the list goes on. In a roundabout manner, Danko Jones has locked its place alongside these enduring triads while demonstrating varying amounts of inspiration taken from all of the above. Power Trio rips like a punkish metal band discovering the use of whiskey and motor oil for lube, and sawdust and Brylcreem as nacho toppings. It’s the record that wears brass knuckles instead of wedding rings and punches critical race theory in the scrote sack by combining the best (and not so best) 60s rock, 70s punk, 80s metal with Rob Bowman’s Stax collection and Berry Gordy’s star making sense of groove.

Songs like…well, pretty much all of them are a mere handful of power chords arranged and rearranged into I-V-IV and otherwise familiar chord progressions driven by a pocket groove and curled lip vocal snarl. Bits and pieces of Cheap Trick and Thin Lizzy elbow their way into the fray of “Raise Some Hell” and “Ship of Lies,” whereas “Blue Jean Denim Jumpsuit” draws bits and pieces of Rocket from the Crypt and Tower of Power into its staccato swagger. Sure, a noticeable amount of the soloing exhibits a glaring weakness in how aching and deleterious simplicity can redirect parts of songs into ineffective territory, and some of the riffs are a bit too close to the comfort of bigger hits (“Start the Show” refers to “Back in Black” in a way Airbourne wish they could figure out), but ultimately Power Trio rocks, plain and simple. And proves that plain and simple rocks.

As for point number two, a question that’s been hanging in the air since the beginning of rock ‘n’ roll is what happens once the singer-songwriter as love and lust-chasing protagonist nabs the object of their dreams and desires? All that mellifluous crooning, screamin’ and yellin’ and hootin’ and hollerin’ about loving so-and-so forever and never letting him/her go may make for catchy lyrics and infectious sing-alongs, but what comes next? Was Motörhead right? Is the chase really better than the catch?

If the pandemic has taught us anything it’s that spending too much time in the company of the same people in the same setting (even if “without end” refers to a mere 16-18 months) will sand the sharp edges of excitement in any relationship. On that tip, Danko Jones, for all his years of saluting the female form, ladies’ sartorial selections, and seemingly wagging his tongue at anything with two tits and a camel toe, is actually more about the chemistry of friendship and romance, if not matriarchal reverence. Power Trio may have him sounding like a braying hound dog on the R&B slinging “Good Lookin’,” the proto metal punk melding of “Dangerous Kiss” and bar brawling “Saturday,” but these are more odes to rocking worlds via the comfort of tunnel vision monogamy, lascivious as it may be. Ultimately, Danko could be singing about one woman, he could be singing about every lady in the crowd, or about every woman ever. But whoever it is in his crosshairs is in for a world of admiration, the sort that grows a mutually hot and steamy long-term partnership. Sort of like the one between performer and fan that endures 10 albums, 25 years, and a fucking global pandemic. ~ Kevin Stewart-Panko