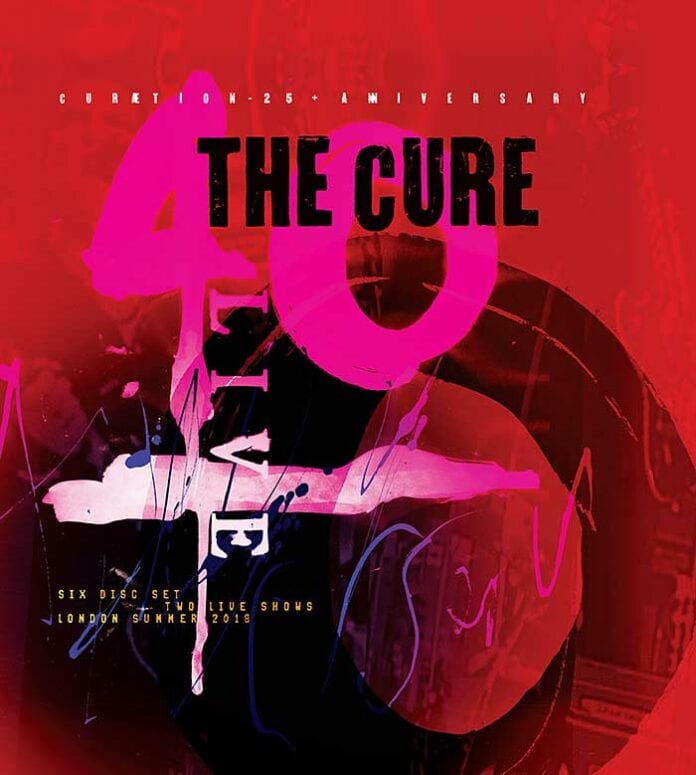 40 Live presents two very different 2018 concerts by The Cure in celebration of the band’s 40th anniversary in a variety of digital formats and limited editions. Curætion-25: From Here to There, filmed at the final night of the 25th Meltdown Festival at London’s Royal Festival Hall and directed by Nick Wickham, is a procession forward and then back through The Cure’s discography, resulting in two songs each from the band’s full-length releases. This concert feels like a typical Cure performance, letting the music speak for itself with the band dutifully performing these 28 songs, which includes a sprinkling of fan favorites and many tracks seemingly unearthed for this show (“Bananafishbones” anyone?). Robert Smith delivers an emotional “Disintegration” and is a bit lively during “High.” Reeves Gabrels is able to cut loose in his patented style somewhat on “A Night Like This” and “From the Edge of the Deep Green Sea,” and, of course, Simon Gallup’s bass is the heart and backbone of The Cure. Smith is almost entirely silent in between songs, managing only a couple of thank yous, and director Wickham attempts to unnecessarily liven up the proceedings by using video effects straight out of the 80s on many of the songs, which prove to be distracting and annoying. Because of the song selections and their systematic order of presentation, Curætion-25 is definitely a concert for Cure completists.

Anniversary: 1978–2018 Live in Hyde Park London, on the other hand, is an immensely joyful celebration of The Cure, with an endless sea of 65,000 fans. Smith and the band are genuinely enjoying themselves throughout the entire performance, with plenty of smiles, playfulness, and energy, which, after 40 years, the band deserves. It does take a little bit of an adjustment to see The Cure begin the concert in the bright daylight in front of a truly massive crowd, as the band plays 29 of their best-loved songs for over two hours. On paper, the set list doesn’t have many surprises—your favorite is probably here—but these live versions outshine many of their studio counterparts, especially the band’s earlier material, and Robert Smith’s voice has held up impressively well over the years and sounds unbelievably better than ever. Masterfully directed by Tim Pope, Anniversary is an amazing concert to see and hear, letting the viewer experience the enormity of the concert as well as the intimacy of the band. Robert Smith is especially animated during “Close to Me,” in which he dances and smiles from ear to ear, and the darkness finally begins to fall during “Fascination Street.” “Push,” from Head on the Door, is a surprise and clearly gets the crowd riled up, and every song on this set list plays like a highlight. Following “Disintegration,” the band takes a brief break before going into “Lullaby,” and after a raucous “Why Can’t I Be You?,” Smith delivers a sincerely heartfelt thank you to the audience for 40 years of The Cure. The band then launches into an electrified closing string of their earliest material—“Boys Don’t Cry,” “Jumping Someone Else’s Train,” “Grinding Halt,” “10:15 Saturday Night,” and finally “Killing an Arab.” Anniversary is a concert to be watched and celebrated over and over, and clearly establishes The Cure as the best band of its generation. ~ Rodney Kusano