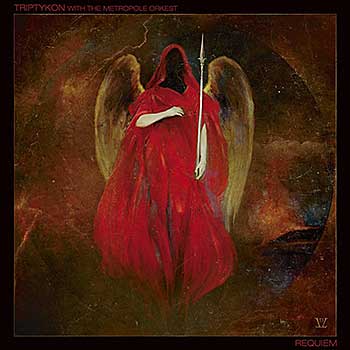 After over 30 years, Triptykon has released Requiem (Live at Roadburn 2019)—a performance dedicated to Martin Eric Ain and HR Giger—and even though the band claims this is a stopgap release, it deserves much more recognition. To fulfill Thomas Gabriel Fischer’s vision, Triptykon teamed up with the Metrople Orkest for the orchestral elements, and the symphonic factors combined with Triptykon’s own signature dark sound creates an illimitable atmosphere.

Arranger and co-composer Florian Magnus Maier states they did not want a huge orchestra, so they decided on a small lineup consisting of heavier orchestrations to compliment the band’s sound. Listeners can hear trumpets, trombone, French horns, cello, and violas and violins. Overall, this performance doesn’t sound like the typical metal band performing with a symphony act. The whole performance is dark and haunting, and the orchestral elements only add to that atmosphere. The classical elements don’t simply sound like background noise—the instruments were carefully chosen and blend in organically with Triptykon’s already creepy music.

Requiem consists of three parts: “Rex Irae,” a song that first appeared on Celtic Frost’s Into the Pandemonium, the unreleased middle track “Grave Eternal,” and the final track “Winter,” which is featured on the Celtic Frost album Monotheist. Triptykon performed this masterpiece at 2019’s Roadburn Festival, and those who witnessed this album performed live are extremely lucky. Even the recordings completely overpower the listener, so the live performance must have been life-changing.

The current Triptykon lineup consists of the legendary Fischer on vocals and guitar, V. Santura on guitar, Vanja Slajh on bass, and Hannes Grossmann on drums. The performance opens up with “Rex Irae,” a breathtaking yet chilling track. You’re immediately captivated by the catchiness of the song. The added classical instruments make the song sound more morbid than the original, and this live recording will definitely leave the biggest impact on listeners. The song also features a guest vocalist, Safa Heraghi, and she deserves plenty of attention—her voice completely seizes you. “Rex Irae” heavily features her vocals, and you’re completely entranced during the entire track. Her voice holds the ideal combination of soul and gloominess, perfect for this bleak performance. Comparing this with the original Celtic Frost track, Heraghi’s voice is much better suited for this song. While Celtic Frost had an amazing singer originally on this track, her voice was too operatic and didn’t fit with the somber atmosphere. Heraghi has an impressive range, but her voice also has more emotion and depth, truly capturing the power of this song.

Since we’re talking about band members, let’s discuss drummer Hannes Grossmann. This is his first recording with Triptykon, but Grossmann is no new player. In case you have no idea who this legend is, his impressive résumé includes Necrophagist, Obscura, Blotted Science, and he’s currently in Hate Eternal, Alkaloid, Eternity’s End, and also has his own solo project. Triptykon couldn’t have picked a better drummer. Hannes’ drum skills are diverse, and while Triptykon isn’t the most technical band, his playing varies between tearing up the kit during “Rex Irae” to a slower yet equally impressive style during “Grave Eternal.” The drums really make up the power during this entire performance, and there’s no other drummer out there who can convey that to a listener better than Grossmann.

Going into “Grave Eternal,” this song is heavy and chilling. “Grave Eternal” meshes those two aspects flawlessly, and it creates a different atmosphere than the more exhilarating “Rex Irae,” which knocks the listener off guard. V. Santura’s impressive guitar solo is met with Heraghi’s vocal accents, carrying you throughout the track. Another interesting point to note about “Grave Eternal” is it makes up the bulk of the album—32 minutes out of the 46 minute run time—and it never once gets boring. As mentioned, Triptykon isn’t the most technical or progressive band, so all changes are subtle, but when they happen, the alterations are so powerful they will leave you with goosebumps. After “Grave Eternal” comes “Winter.” Celtic Frost fans will know this song because it’s on the Monotheist album. “Winter” opens with an onslaught of classical instruments with Heraghi’s vocals in the background. It’s a very moving piece, perfect as the epilogue for the performance.

Requiem also shows a different side of Fischer. While he moved to a more experimental and avant-garde direction with Triptykon, he’s taking his ideas to the next level. Requiem is truly a look at what goes on in Fischer’s mind, and the listeners can dissect his brain with this album. Overall, Requiem is an album 30 years in the making and a gift for fans of the band. Any listener can not only hear the beauty of the performance but also the hard work that came with the final result. We can only imagine what it was like witnessing this performance live and hope Triptykon holds this performance again in the future. For now, indulge in this album and let the creepy atmosphere consume you. ~ Stephanie Jensen