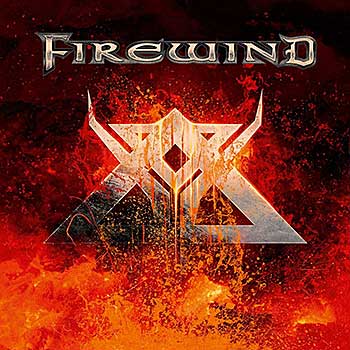 HARD ROCK POWER METAL: Greek guitar god Gus G (real name Kostantinos “Kostas” Karamitroudis) was born to shred. Throughout his spectacular 20 year musical career, the six string axe slinger has performed with well established acts such as Arch Enemy, Mystic Prophecy, and Dream Evil—along with his own band Firewind, as well as his solo projects (three full-lengths so far)—before landing his dream job of playing alongside the Prince of Darkness in Ozzy Osbourne’s band from 2009 to 2017.

On Firewind’s ninth full-length album, Firewind, the band—featuring guitarist Gus G, new vocalist Herbie Langhans (Avantasia, Sinbreed, Voodoo Circle), bassist Petros Christo, and drummer Jo Nunez—has crafted an energetic hybrid of hefty hard rock with majestic power metal. On its 11 fiery tracks, the band is in full throttle mode. Gone are longtime collaborator/keyboardist Bob Katsionis and last album’s vocalist (in which Firewind has had many throughout its 22 year existence) Henning Basse. However, a new vocalist doesn’t really change the band’s dynamic. In fact, with fewer keyboards this time around (handled by Gus himself) and grittier vocals from Langhans, Firewind sounds more focused and more passionate than ever.

The following tracks “Devour” and “Rising Fire” continue the band’s forte with hefty riffs and thrusting rhythms. “Break Away,” which was originally meant to be an instrumental for one of Gus’ solo albums, contains one of his most memorable guitar solos on the entire album. It’s no secret that Gus is a big fan of neoclassical guitarists such as Yngwie Malmsteen and Chris Impellitterri, so it’s only natural that these influences pop up a few times throughout the album. Gus’ fondness for 70s/80s hard rock in the vein of Ozzy, Van Halen, Scorpions, and Dokken shine through on tracks “Overdrive,” “All My Life,” “Space Cowboy,” and “Kill the Pain.”

Firewind is a worthy successor to the band’s 2017 concept album Immortals, consisting of a melodic but tough attitude. It’s a new era for Firewind, and Gus G & Co. are reaping the rewards. ~ Kelley Simms