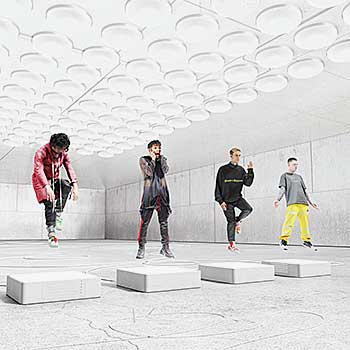 Crown the Empire puts its best post-hardcore foot forward on Sudden Sky, delivering a series of anthemic bangers that lean heavy on atmospherics and swirling riffs (“20/20,” “What I Am,” “Blurry (Out of Place)”), before they flip the metalcore switch on the standout “Red Pills,” a true highlight of Sudden Sky that combines driving guitars, sky high vocals, and an intense sense of resolve. Lead single “MZRY” follows in kind, adding yet another standout track to the mix, thanks in part to frontman Andy Leo’s dazzling array of clean tones and harsh shrieks. “SEQU3NCE” continues along this heavy path, sounding like early My Ticket Home at times with breakdowns and downtuned riffs galore. Penultimate track “March of the Ignorant” is a stunning departure from the rest of the album, sounding as if Crown the Empire plucked a B-side from Linkin Park’s Living Things recording sessions and haphazardly dropped it into the track list of Sudden Sky. Luckily, the closing title track quickly erases that unpleasant memory with a blast of bombastic riffing, soaring hooks, and raucous screams.

Sudden Sky tends to meander at times, though those stretches are kept very short. This album does enough to please fans of Crown the Empire’s earlier work (The Fallout) and their latter work (Retrograde), as well as fans of both the post-hardcore and metalcore genres. ~ Brian Campbell