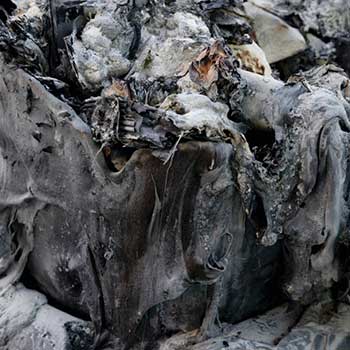 JARRING BLACK METAL NOISE: Annihilus is the one-man black metal project of Chicago based musician Luca Cimarusti, and Follow a Song from the Sky is his sophomore release.

Opener “The Grand Illusion” is atmospheric and dissonant, a veritable malaise of heavily distorted, feedback-laden guitars and loud cymbals crashes that roughly amounts to five minutes of nails on a chalkboard. The vocals are faint and nearly non-existent amid the cacophony of noise. “Twist Ending” is less abrasive and grating to the ears, though, unfortunately, those issues still persist. “Twist Ending” rounds slightly into form towards the end, and the vocals come a bit more into view on “Draw the Beast,” which is a shame because they sound good, ebbing and flowing with each muffled scream and shriek and smattering of guitars. “Winter Song” has its scathing moments,  “The Voice of Shai-Hulud” leans more into its atmospheric elements than the other songs, which results in a few memorable moments, and “AMA” is a manic sprint that chokes through the noisy haze to create one of the stronger tracks of Follow a Song from the Sky. Closer “Song from the Sky” embraces all of the best things about Follow a Song from the Sky, opting to focus on the ominous, foreboding spoken word vibe that was successful earlier in the record. Honestly, this is the most successful and enjoyable the album gets.

Follow a Song from the Sky is certainly raw, which is putting it nicely. At times, the record is borderline unlistenable, even when adjusting the volume and changing headphones. The production and recording of Follow a Song from the Sky is a hindrance. When things level out, you can hear there is talent and some promise here, but those points are too few and far in-between. ~ Brian Campbell