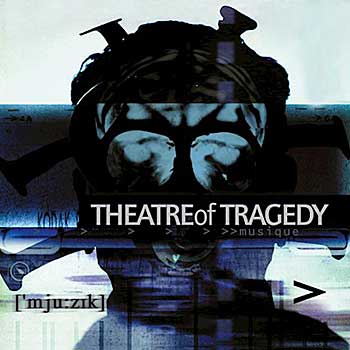 GOTH METAL TRUMPED BY ELECTRONICA: In the history of musical departures, the leap Theatre of Tragedy made from 1998’s Aégis to Musique two years later ranks in the upper echelons of rat-fucking the expectations of a band’s fan base. Upon initially forming in the early 90s, the band made a gradual shift from gothic/doom/death to full-on drawbridge over castle moat, damsel in distress, rose petal goth metal by the time of Aégis, their wildly popular third album. So, imagine the surprise of those adorned in floor length prom dresses, crushed velvet smoking jackets, and frilly pirate shirts when Musique sidled out of the gate like a 56 kbit/s dial-up internet connection in 2000.

The past had the band—then comprised of vocalists Raymond I. Rohonyi and Liv Kristine Espenæs, guitarist Frank Claussen, keyboardist Lorentz Aspen, and drummer Hein Frode Hansen—heavily indebted to lush gothic metal with lyrics written in Early Modern English glad handing fantastical poetry, themes of medieval folklore, and mythological recounting. Musique saw the quintet make an astronomical leap into new territories. Musically, it sounds as if they took their advance money and bought everything available that was powered by then state of the art microchips before blowing the remainder on the complete WaxTrax!, Cleopatra Records, Joy Division, Bauhaus, Gary Numan, and Depeche Mode catalogs. The album also saw Rohonyi and Liv Kristine singing in a style of English that those beyond literature majors and poet laureates could understand while tackling topics relevant to life in the new century. They also made sidelong references to Kraftwerk in “Commute,” delivered one of history’s most cringeworthy anthems on the topic of female sexual empowerment with “Image,” sampled home computing technology on “Reverie,” and dispensed with references to the Soviet space program throughout both the album’s songs and packaging.

As maligned as Musique initially may have been by old school fans, traditionalists, and narrow thinkers, the album ended up reaching beyond loyalists and expanding the band’s fan base to end up being one of their best sellers. And that’s due to the fact that it’s pretty good. Plain and simple. Sure, the fabric of gothic/industrial metal wasn’t upended by the album’s overwrought clichés and Rohonyi trying too hard to fit into a Krautrock black turtleneck, but this (very) small-c classic houses a number of catchy ditties that have stood the test of time. “Machine,” “Radio,” “Crash/Concrete,” the title track, and the aforementioned “Image” are all top-shelf , black lit dance floor thumpers with robotic vibes and lustrous metallic sensibilities, especially the latter, which, in all honesty, is an insanely catchy tune despite its utterly ridiculous lyrics.

Twenty years later, the album is available in enhanced and expanded form and on vinyl for the first time. Along with a remixed version of the original record, 11 bonus tracks are included, ranging from unreleased songs and alternate versions, including a French lyric version of “Image,” which, improbably, makes it sound even more ridiculous (but still awesome) than the original. The source material has aged well and, in some cases, the stilted and unforgiving linearity provides a rear view mirror relevance. Musique wasn’t especially ahead of its time upon its original release. It was just very different than what the public was expecting, or wanting. Those who were content to revel in the musical equivalent of wandering through Sherwood Forest during Renaissance times were fast-forwarded into an age of pixelated test patterns, processed sounds, cyborg rhythms, and the shadow of Y2K. Some hitched a ride on the flashing lights and bleeping sounds, others retreated to the comfort of their spires. Life went on and an album that sounded like the Jetsons family did to the Flintstone family settled in, found its niche, and, now, lives another day. ~ Kevin Stewart-Panko