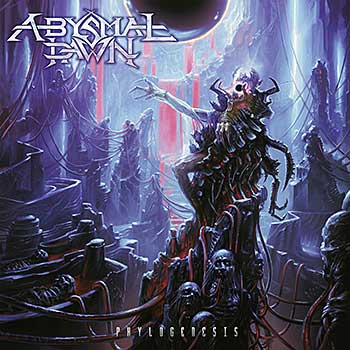 Abysmal Dawn has progressed exponentially with each release, and on Phylogenesis, the band nails it. The band has become more adventurous with its songwriting, while retaining its trademark traits—bludgeoning maelstrom of furious riffs, blasting rhythms, and vitriolic growled vocals. Since 2014’s highly praised Obsolescence, several personal things effected Elliot’s mental state, including new band members, resulting in some of his most personal lyrics to date.

Right out of the gate, opening track “Mundane Existence” gives an accurate clue as to what’s in store with the rest of the record. Following tracks “The Path of the Totalitarian” (about bickering on social media) and “Hedonistic” (about the pursuit of happiness) are equally as pummeling, with a relentless assault of battering drums and fiery guitar riffs. The thing you’ll notice immediately while listening to Phylogenesis is the amount of groove and churning rhythms injected into each track, while the riffs are technically blistering without being too technical.

“A Speck in the Fabric of Eternity” and “Soul-Sick Nation” (featuring Fredrik Folkare of Unleashed) are furious blasts of aggression with loads of groove yet once again. Closing the album with an awesome cover of Death’s “Flattening of Emotions” makes perfect sense, as its overall lyrical theme fits in perfectly with Abysmal Dawn’s death metal aesthetics.

Add in the killer cover artwork created by renowned illustrator Pär Olofsson, who has created every Abysmal Dawn cover to date, and you have one of the most ferocious modern death metal albums of 2020. ~ Kelley Simms