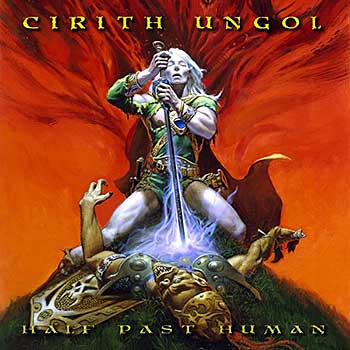 CIRITH UNGOL
Half Past Human

HEAVY/DOOM METAL: Like many bands, Ventura, CA’s Cirith Ungol had a big list of plans for 2020 scuttled by COVID-19. And like many bands, Cirith Ungol jumped back into writing and recording mode once they peeled themselves off the couch after binge watching Tiger King. The difference in Cirith Ungol’s plan of attack with Half Past Human is that the four tracks here are both new and old additions to the band’s discography, which itself spans back to 1978’s Orange Album demo. And whaddya know, the lead-off track to Half Past Human, “Route 666” is the closer of that slice of old school doom/traditional metal/biker bar rock divinity. The past survives into the present as the band peppers the track with a groovy ride cymbal swing and guitars dueling over a landscape in which mystical orcs and fire breathing dragons collide with drag racers in a hazy pinball parlor. All the songs featured have been sitting in the Cirith Ungol vaults for only they know how long and have been previously unreleased (the ancient version of “Route 666” and “Brutish Manchild” notwithstanding).

The original songs have been souped up and jacked up with the original Ungol spirit—epic doom/heavy metal with a Motörhead meets Manilla Road swagger, scorching bluesy leads, and Tim Baker’s raw vocal yell—driving each piece. They might make repeated use of procedural breaks and songwriting tricks, especially in how they spin back around to a song’s main riff or chorus—check “Shelob’s Lair” and “Brutish Manchild” for the best/worst examples of this—but there’s some serious sword swinging power metal happening here that waves the metal flag high and proud. Also, unlike Joe Exotic, they prove that old dudes can have cool hair. ~ Kevin Stewart-Panko