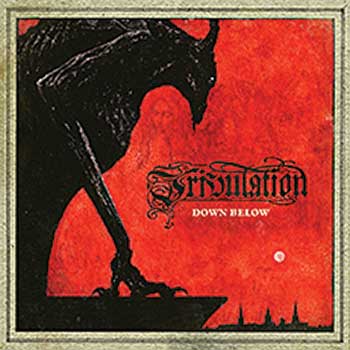 EVIL METAL: It’s surprising that rising Swedish stars Tribulation would choose to do a concept album about Australia after three horror themed albums (including one literally called The Horror), but their much anticipated follow-up to their 2015 breakthrough, Children of the Night, appears to be just that if the title is anything to go by. Wait. No. That would be “down under.” Down Below is a concept album about hell. That makes more sense. They may not have the most original subject matter, but they know how to write some wicked tunes. Drawing influence from black metal groups like Immortal, melodeath outfits like In Flames, and old school acts like Mercyful Fate, Tribulation has crafted a sound that transcends subgenre boundaries and just sounds like the platonic ideal of metal. Their latest release is very much a follow-up to Children of the Night. Rather than a significant evolution, it’s a refinement. With riffs this killer, though, that’s okay. “Nightbound” and “Subterranea” deliver both chills and impressive fretwork. They still have the ability to surprise, like the John Carpenter pulse underlying “Cries from the Underworld.” Groundbreaking or not, great songs are great songs. Tribulation takes a traditional metal sound and make it feel fresh. It’s a hell of an accomplishment. ~ Jeff Treppel